Walking With Wikis
Register
Don't have an account?
Sign In
Advertisement
in: Featured Articles, Creatures, Creatures in Walking with Dinosaurs,
and 13 more

Large body; traveled in herds and with Polacanthus; striped body and legs; related to European Iguanodon

Walking with Dinosaurs: Giant of the Skies


The North American Iguanodon was an iguanodont from the Cretaceous period. It was related to the European Iguanodon.

The North American Iguanodon had the same body plan but was smaller than its European counterpart.

It had long hind legs and shorter front legs. Contrary to what was previously thought, these dinosaurs walked in a quadrupedal stance, but they ran in a bipedal manner. On their front legs, the thumbs were spikes to possibly act like a last line of defence against carnivores.

It had a long head with a blunt beak. Inside its mouth was a large battery of teeth designed to grind plant matter rather than to just rake the leaves off. This was less efficient than the mouths of hadrosaurs, so when they evolved, the iguanodonts died out.

The North American Iguanodon was a type of iguanodont dinosaur. They were social animals that lived in vast herds. They lived in herds as a method of protection due to the fact that individually, they had barely any weapons or means of defense. As a herd, however, these dinosaurs could stampede, overrunning their predators and trampling them into the ground. However, living in these large herds, they would also have constantly migrate to find new growth to feed on.

The North American Iguanodon and its relatives were unique as they were the first herbivores to develop back teeth designed to chew its food. This was one of the key factors to the success of the species.

The North American Iguanodon as well as its European relative had a relationship with the nodosaur Polacanthus. This was probably to provide protection for each other.

As a male Ornithocheirus flew over, a massive herd of North American Iguanodon as well as some Polacanthus were traveling across a beach to find food. As the adults continued their journey, some of the adolescents began playing whilst making high-pitched trumpets.

During a downpour, the Iguanodon herd began to feed on the vegetation whilst some drank from the sparse puddles.

It can be seen on Nigel's Time Map.

At the time of production, Iguanodon was believed to have lived in North America and Europe. However, recent scientific research has reclassified the North American species as its own genus - Dakotadon. Despite having its own genus, however, it's not known from any good material - only a partial skull. As such, the depiction in the episode was somewhat speculative. 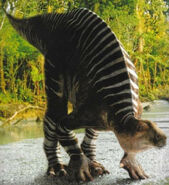