Walking With Wikis
Register
Don't have an account?
Sign In
Advertisement
in: Mammals, Whales, Sea Monsters Animals,
and 14 more

Pliocene
5 to 3 million years ago

Sea Monsters: Into the Jaws of Death


Odobenocetops was a small cetacean from the Pliocene. It is significant for its long, conical tusks that protruded from the sides of its face.

Odobenocetops was a small, marine mammal. The males of the species had a large head with two tusks - one small, one large - each protruding from each side. The females looked similar, but both of their tusks were small. It had a pair of large lips which were used to hold onto the shells of its prey. This made Odobenocetops look more like a modern dugong, or even a walrus, rather than like the other whales, whether modern or extinct.

Odobenocetops also had a short and robust body, a short tail with a proportionally small fluke and a pair of two, large fins.

Odobenocetops were solitary animals. They lived within the thick fields of kelp in the shallow seas of Pliocene Peru. There, they would slowly swim or even just hover over one spot of the seabed to find suitable prey. They would use their large mouth to hold onto shelled prey whilst sucking the animal from its shell.

The tusks of Odobenocetops were present in both genders. However, the males possessed a longer right tusk. They were most likely used for jousting during courtship but not for defense as the tusk was relatively brittle. Other theories include a non-violent demonstration before the females or a possible sensory organ, as it is in the case of the modern male narwhals.

Odobenocetops were preyed upon by juvenile Megalodon. However, as their habitat contained thick forests of kelp, they could easily hide from the shark.

Nigel Marven found an Odobenocetops foraging for food in a dense field of kelp off the coast of Peru. Whilst watching the cetacean feeding, he quickly noticed a juvenile Megalodon swimming above him.

The shark chased the Odobenocetops but fortunately for the bottom feeder, it managed to escape by hiding in the foliage. As the Megalodon swam away, the cetacean soon did the same. 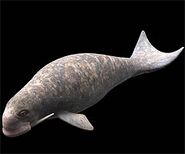 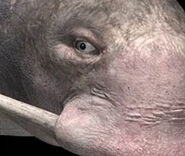 In 2005, stamps from Liberia reused images of many Walking with... animals. Including Odobenocetops.[1]