Walking With Wikis
Register
Don't have an account?
Sign In
Advertisement
in: Sea Monsters Animals, Walking with Dinosaurs Animals, Carnivores,
and 25 more

Walking with Dinosaurs: Cruel Sea
Ophthalmosaurus was an ichthyosaur - a fish/dolphin-like marine reptile - of the Middle to Late Jurassic period (200 to 145 million years ago), named for its extremely large eyes.

Major fossil finds of this species have been recorded in Europe, North America, and Argentina. Like all of its relatives, it gave birth to live young due to the fact it was so specialized to life in the open ocean.

New-born pups only had a few seconds to reach the surface and take their first breath. From the moment they were born, the little pups were vulnerable. Even adult Ophthalmosaurus will eat the offspring of others to increase the chance of survival of their own pups. The only real safety was among the crags of coral.

Coral reefs in the Late Jurassic seas were full of baby Ophthalmosaurus. Those intricate network of caves was their refuge, a safe haven from which they can start to learn about their new world.

Unlike adults, the baby Ophthalmosaurus had prominent teeth.

Ophthalmosaurus adults were masters of hunting at night. With their enormous light-sensitive eyes, they could pick out squid in the gloom. Their long toothless snouts are streamlined weapons, making it easy for them to snap up fast-moving prey. 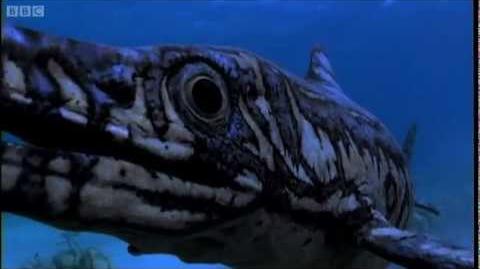 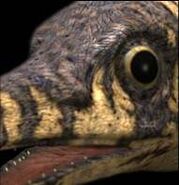 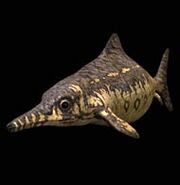 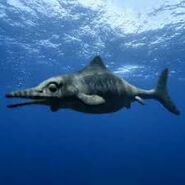 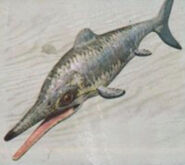