One Edlerly Male
One Young Individual

Walking with Dinosaurs: Giant of the Skies
Chased by Dinosaurs: Land of Giants


Ornithocheirus was a huge pterosaur from the early Cretaceous (135-100 MYA) South American deposits.

Ornithocheirus was featured in the 4th episode of Walking with Dinosaurs, where the program followed an aging male during his last mating flight. In that episode, this pterosaur (and some others) were shown holding group leks, just like some modern birds, and possessing similarly bird-like sexual dimorphism: in particular, males had a crest at the tip of the snout which was used for display during mating and - to a lesser extent - for competition between males. Outside of mating, Ornithocheirus was apparently a lone pterosaur, the members of that species avoiding each other, preferring the company of other, smaller pterosaurs, whom they would probably occasionally harass to steal their catch.

Ornithocheirus also had a cameo appearance in the second episode of Chased by Dinosaurs, "Land of Giants". In that episode Nigel Marven identified this flying reptile as the biggest pterosaur ever, but that is incorrect, Quetzalcoatlus, Hatzegopteryx, and Arambourginia were bigger. Several large bone fragments from the Santana Formation of Brazil indicate that Ornithocheirus may have been one of the largest pterosaurs that ever lived, with a wingspan around 6–8 meters (20–27 ft) from wingtip to wingtip. With a body bigger than a human's, it was the undisputed 'King of the Skies'.

Only the males had the crests on their beak, and males are a tiny bit bigger than the females.

An old male was shown as the main character in Giant of the Skies episode.

A toy of Ornithocheirus was made by Toyway for their Walking with Dinosaurs line. It is the rarest of the line as it was never commercially released, and could only be obtained in a giveaway, which makes it valuable to collectors.

Ornithocheirus in Land Of Giants 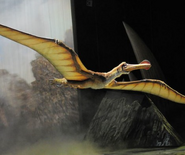 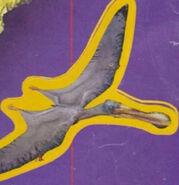