Small with a crest (In the Series)

Ornitholestes is a genus of theropod dinosaur which lived during the late Jurassic period in what is now North America (150-139 MYA).

Ornitholestes was a relatively small dinosaur, measuring 2.5 meters in length and weighing around 15 kg. This dinosaur lived in the same place and the same time as many of the giant Jurassic dinosaurs like Apatosaurus, Stegosaurus and Allosaurus. However, Ornitholestes most likely stayed away from these animals and focused on hunting small animals and baby dinosaurs, as seen in Time of the Titans. 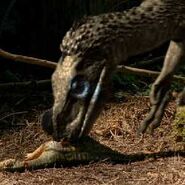 It was portrayed as an egg thief/antagonist that preyed on baby Diplodocus and Allosaurus.

An Ornitholestes was seen eating an hatched Diplodocus sauropodlet, whilst the remaining babies emerged from the soil, the carnivore watched as it already ate its fill. Later, the same Ornitholestes passed by the Diplodocus creche which was hiding in the undergrowth.

The Ballad of Big AlEdit

A pair of Ornitholestes were seen stalking a group of baby Allosaurus. Another was later seen protecting its nest from Big Al.

Appearances In Other MediaEdit

Ornitholestes appears in the episodes Babes in the Woods and The Inquisition with an appearance similar to its' WWD depiction.

A carcass of an individual is discovered Martin Guitierrez in the novel. It was said to have skin like Carnotaurus, which was depicted with chameleon-like abilities.

Retrieved from "https://walkingwith.fandom.com/wiki/Ornitholestes?oldid=58104"
Community content is available under CC-BY-SA unless otherwise noted.