Walking With Wikis
Register
Don't have an account?
Sign In
Advertisement
in: Herbivores, Herd animals, Walking with Dinosaurs Wonderbook animals,
and 18 more

A head with a thick dome

Meaning "thick headed lizard", Pachycephalosaurus lived during the very Late Cretaceous period in what is now North America. It is famous for its thick, domed head, whose purpose has been highly debated among scientists. It was an herbivorous, or possibly omnivorous, bipedal creature and was one of the last non-avian dinosaurs to exist before the Cretaceous–Paleogene extinction event. It lived among other North American dinosaurs such as Triceratops, Torosaurus, Ankylosaurus, and Tyrannosaurus.

The thick dome on the skulls of Pachycephalosaurus and related genera gave rise to the hypothesis that pachycephalosaurs used their skulls in intraspecific combat. However, this hypothesis has been disputed in recent years. It was originally thought that pachycephalosaurs bashed heads during the mating season, much like the modern ibex or big-horn sheep. However, it is now believed that pachycephalosaurs could not have used their heads for head-butting. For one thing, the skull roof was probably ill-suited to sustain an impact associated with head-butting. Furthermore, the cervical and anterior dorsal vertebrae show that the neck was held in an "S" or "U"-shaped curve, rather than a straight line, and thus, unfit for direct head-butting. Also, the rounded shape of the skulls would lessen the contacted surface area during head-butting, which would result in glancing blows. So, it is more likely that the animals butted their heads against each other's flanks, during the mating season, not unlike giraffes do today.

Pachycephalosaurus is the focus of Chapter 5: King of Dragons in which a Pachycephalosaurus named Ficus meet Lily before experiencing a volcanic eruption and trying to survive while being pursued by a Tyrannosaurus rex named Malachite.

Pachycephalosaurus is one of the viewable dinosaurs in this app. 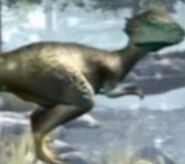 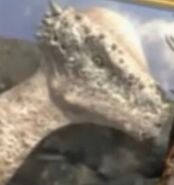 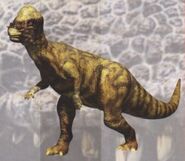