Walking With Wikis
Register
Don't have an account?
Sign In
Advertisement
in: Characters, Pachyrhinosaurus, Dinosaurs,
and 26 more

Pachyrhinosaurus (meaning 'thick-nosed lizard') was an ceratopsian relative of Triceratops and Torosaurus that lived in the Late Cretaceous in Canada, though earlier than them.

The largest Pachyrhinosaurus species were 8 meters (26 ft) long, stood about 7-10 feet tall and weighed about as much as 4-5 tons. They were herbivorous and possessed strong cheek teeth to help them chew tough, fibrous plants. Pachyrhinosaurus could have run at speeds as fast as 24 miles an hour.

Instead of horns, their skulls bore massive, flattened bosses; a large boss over the nose and a smaller one over the eyes. A prominent pair of horns grew from the frill and extended upwards. The skull also bore several smaller horns or ornaments that varied between individuals and between species. In P. canadensis and P. perotorum, the bosses over the nose and eyes nearly grew together, and were separated only by a narrow groove. In P. lakustai, the two bosses were separated by a wide gap. In P. canadensis and P. lakustai, the frill bore two additional small, curved, backward-pointed horns. These were not present in P. perotorum, and in fact some specimens of P. lakustai also lack them, which may indicate that the presence of these horns varied by age or sex.

Various ornaments of the nasal boss have also been used to distinguish between different species of Pachyrhinosaurus. Both P. lakustai and P. perotorum bore a jagged, comb-like extension at the tip of the boss which was missing in P. canadensis. P. perotorum was unique in having a narrow dome in the middle of the back portion of the nasal boss, and P. lakustai had a pommel-like structure projecting from the front of the boss (the boss of P. canadensis was mainly flat on top and rounded). P. perotorum bore two unique, flattened horns which projected forward and down from the top edge of the frill, and P. lakustai bore another comb-like horn arising from the middle of the frill behind the eyes.

The film follows a herd of Pachyrhinosaurus, but more particularly an individual named Patchi, from his birth to his adulthood as well as the relationship with his brother Scowler and his love interest Juniper.

Read more at the Land Before Time Wiki

A Pachyrhinosaurus appeared in the Land Before Time series.

Many Pachyrhinosaurus appeared in the movie, none however had an important role.

Pachyrhinosaurus appeared in the ITV TV film March of the Dinosaurs.

Pachyrhinosaurus was featured in the JFC episode The River of Death.

A herd of Pachyrhinosaurus.

Two Gorgosaurus have pinned down a Pachyrhinosaurus. 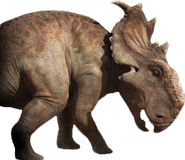 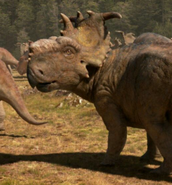 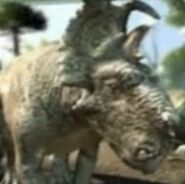