Walking With Wikis
Register
Don't have an account?
Sign In
Advertisement
in: Characters, Pachyrhinosaurus, Walking with Dinosaurs 3D Characters,
and 15 more

Patchi is a male Pachyrhinosaurus and the protagonist of Walking with Dinosaurs: The Movie. He is the offspring of the leader of the herd, Bulldust, and his mother's name is unknown as she is only referred to as Patchi's Mother. His brother is Scowler.

Patchi looks like any other Pachyrhinosaurus. The only thing that makes him different is his small size (compared to Scowler and Juniper) and a hole in the right side of his frill caused by a Troodon that tried to eat him as a hatchling. Because of his small size he is usually looked down on, literally, and Scowler doesn't let him forget that they are nothing alike and even questions his father if they're from the same litter.

Interestingly, while the male pachyrhinosaurs are mostly grey in color, Patchi appears to be reddish in color.

Patchi was hatched from an egg smaller in size than those of his brothers and sisters - he was the runt of the litter. Right from the start, Patchi's life was filled with adventure. No sooner was he free of his eggshell than a pack of Troodon tore through the nesting ground, and one attempted to snatch him. Patchi was able to escape with the aid of Bulldust, but his frill was permanently marred by a tooth hole from the attacking predator, something that would cause him problems as he grew older.

A few months later, now large enough to leave the nest and explore more of his world, he met Juniper and instantly fell in love with her. However, he was quickly disapointed to learn that her mother doesn't allow her to talk to members of another herd. Even more, he finds out that her herd has migrated south, as his will too.

Within days, his herd begins the trek south. But on the way, a storm arrives and a lightning strike causes a forest fire. Patchi makes the mistake of getting the attention of a pack of Gorgosaurus. He and Scowler get seperated from the herd and are attacked by Gorgon, leader of the pack. Bulldust intervenes, but is killed in the process. In the aftermath of the fire, they find no sign of the rest of their family, their deaths implied. But their luck turns around when they come across Major leading the herd. Much to Patchi's delight, it has merged with Juniper's. Throughout the migration, he and Scowler compete for Juniper's attention, much to both her and her mother's annoyance.

Later, Gorgon and his pack attacks again. Patchi, Scowler, and Juniper are cornered along with the weaker members of the herd at the river. Juniper falls into the river during the chaos, resulting in Patchi "diving" after her and Scowler following. They wash ashore somewhere along the coast and encounter a herd of Edmontosaurus. They follow them, but Juniper's broken leg slows her down and Patchi stays with her. Scowler leaves them behind and they're attacked by crabs. They're however saved by some Quetzalcoatlus and retreat to the forest, where they encounter a sleeping Gorgosaurus and several Chirostenotes, whom Patchi refers as "skinny-necked pecky thingys" since their name is too complicated to pronounce. They escape and make it to their winter sacntuary, where they reunite with Scowler.

Years later, Patchi has grown up, along with Scowler and Juniper. He is challenged by Major, but Scowler steps in and a duel insues, with the latter winning. Scowler becomes leader of the herd and chooses Juniper as his mate, much to Patchi's dismay.

During yet another seasonal migration, Scowler leads the herd through a shortcut, which Patchi quickly recognises as a frozen lake. Realising that they're crossing a deathtrap, Patchi leads the herd off the lake. Scowler, thinking he's trying to steal the herd, challenges Patchi to a fight. It ends with Patchi being defeated and abandoned by Scowler. Heartbroken, Patchi willingly lets some scavengers eat him. However, the sight of a butterfly reminds him of where he met Juniper, along with some encouraging words from Alex, motivates Patchi to get back up and return to the herd. Shortly after however, the Gorgosaurus attacks the herd again, this time targeting Scowler. Not willing to loose another family member to Gorgon, Patchi charges and leads the rest of the herd to fight back. The fight ends with Gorgon loosing his left arm and some teeth, leading to him and his pack retreating. Grateful and apologetic, Scowler gives his position as leader of the herd to Patchi, who also chooses Juniper as his mate.

Back at the nesting grounds, Patchi and Juniper become parents. The first egg hatches and Alex names the smallest one Alex since it means "ridiculously handsome bird", or according to him at least.

Patchi thinks with his heart first and head second. He is very friendly and kind. Patchi is sometimes a coward but can be very brave and courageous when his friends and/or herd are in danger. Patchi usually tries his best to be like his brother Scowler, and his father Bulldust, but usually fails. This is shown when he tries to copy Scowler's way of pushing over a tree. Instead of making it crash to the ground, one of the tree's branches gets caught in the hole in his frill. But in the end, Patchi shows everyone that he is probably the bravest and strongest of them all.

His size shows lack of strength compare to his bigger brother. While Patchi strength wasn't very strong he was faster then his brother. He was also munch smarter then his brother since he learned from his father to knock down trees was very helpful to save the entire herd from the ice bridge. As he was full grown he fought his brother a duel to win the herd. But his strength wasn't strong enough to defeat Scowler. He lost the fight and fell in a hole, and a tree trapped him. Patchi's strength was gain munch stronger when seeing his brother was going to get killed from Gorgon. That gave him the strength he needs to defeat gorgon once and for fall. His body is endurable to take some attacks from Scowler as baby of headbutt that he was able to get back and try to fight again. As fully grown he was able to take the jaw strength of Gorgon. Patchi jaw strength as kid showed to be strong enough to use against Chirostenotes.

Baby Patchi along with Scowler and the rest of their siblings. 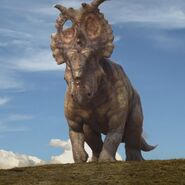