Patchi is a male Pachyrhinosaurus and the protagonist of Walking with Dinosaurs (film). He is the offspring of the leader of the herd, Bulldust, and his mother's name is unknown as she is only referred to as Patchi's Mother. His brother is Scowler.

Patchi looks like any other Pachyrhinosaurus. The only thing that makes him different is his small size (compared to Scowler and Juniper) and a hole in the right side of his frill caused by a Troodon that tried to eat him as a hatchling. Because of his small size he is usually looked down on, literally, and Scowler doesn't let him forget that they are nothing alike and even questions his father if they're from the same litter. When he was chasing an Alphadon, he ran into an Edmontonia.

Patchi was hatched from an egg smaller in size than those of his brothers and sisters - he was the runt of the litter. Right from the start, Patchi's life was filled with adventure. No sooner was he free of his eggshell than a pack of Troodon tore through the nesting ground, and one attempted to snatch him! Patchi was able to escape, but his frill was permanently marred by a tooth hole from the attacking predator - something that would cause him problems as he grew older.

Patchi thinks with his heart first and head second. He is very friendly and kind. Patchi is sometimes a coward but can be very brave and courages when his friends and/or herd are in danger. Patchi usually tries his best to be like Scowler, his brother, and Bulldust, his father, but usually fails. This is shown when he tries to copy Scowler's way of pushing over a tree. Instead of making it crash to the ground, one of the tree's branches gets caught in the hole in his frill. But in the end, Patchi shows everyone that he is probably the bravest and strongest of them all.

His size shows lack of strength compare to his bigger brother. While patchi strength wasn't very strong he was faster then his brother. He was also munch smarter then his brother since he learned from his father to knock down trees was very helpful to save the entire herd from the ice bridge. As he was full grown he fought his brother a duel to win the herd. But his strength wasn't strong enough to defeat Scowler. He lost the fight and fell in a hole, and a tree trapped him. Patchi's strength was gain munch stronger when seeing his brother was going to get killed from Gorgon. That gave him the strength he needs to defeat gorgon once and for fall. His body is endurable to take some attacks from Scowler as baby of headbut that he was able to get back and try to fight again. As fully grown he was able to take the jaw strength of Gorgon. Patchi jaw strength as kid showed to be strong enough to use against Chirostenotes.

Baby Patchi along with Scowler and the rest of their siblings. 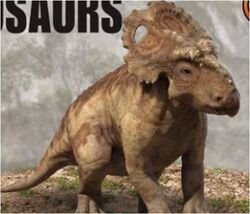 Add a photo to this gallery
Retrieved from "https://walkingwith.fandom.com/wiki/Patchi?oldid=56084"
Community content is available under CC-BY-SA unless otherwise noted.