Walking With Wikis
Register
Don't have an account?
Sign In
Advertisement
in: Dinosaurs, Ceratopsians, Cretaceous Animals,
and 14 more

Pentaceratops is a Ceratopsian dinosaur from North America. It was a cousin to Torosaurus and Triceratops, but lived at a slightly earlier time than they did.

Pentaceratops ("Five-Horned Face") is a genus of herbivorous ceratopsid dinosaur that looked like Triceratops from the late Cretaceous period of what is now North America.

Pentaceratops fossils were first discovered in 1921. The genus was named in 1923 when its type species Pentaceratops sternbergii was described. Pentaceratops lived around 75-73 MYA, its remains having been mostly found in the Kirtland Formation in the San Juan Basin in New Mexico. Other dinosaurs which shared its habitat include Parasaurolophus cyrtocristatus, the pachycephalosaur Sphaerotholus, the armored dinosaur Nodocephalosaurus and the tyrannosauroid Bistahieversor. About a dozen skulls and skeletons have been uncovered, so that most bones are known. Of one very large specimen it is contested whether it belongs to Pentaceratops or represents a genus of its own: Titanoceratops. However, some subsequent researchers have considered Titanoceratops merely a large individual of P. sternbergii.

Pentaceratops was about six metres (twenty feet) long, and has been estimated to have weighed around five tonnes. It had a short nose horn, two long brow horns, and long horns on the jugal bones. Its skull had a very long frill with triangular hornlets on the edge.

Pentaceratops is briefly seen fighting Gorgon the Gorgosaurus in Chapter One : The Great Exodus.

Pentaceratops is one of the viewable dinosaurs in the app.

Pentaceratops in the trailer for Wonderbook 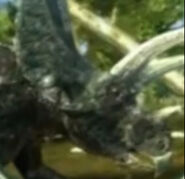