Walking With Wikis
Register
Don't have an account?
Sign In
Advertisement
in: Pterosaurs, Sea Monsters Animals, Walking with Dinosaurs Animals,
and 21 more

Walking with Dinosaurs (New Blood)
Sea Monsters (Sea Monsters, Episode 1)
Peteinosaurus is a genus of basal pterosaur which lived during the late Triassic period in what is now North America and southern Europe. (212-200 MYA)

A small member of the pterosaur family, these flying reptiles evolved extra-long fingers that helped support their delicate wing membranes. These pterosaurs fed on dragonflies. A jaw full on needle-sharp teeth made short work of their insect prey. Peteinosaurus evolved strong, lightweight bones for flight and, like the dinosaurs, they were fast and deadly. Flying reptiles were becoming the new masters of the air.

By the end of the Triassic this animal had vanished, having been replaced by other pterosaurs such as Anurognathus.

A Peteinosaurus was first seen flying over a river before landing to drink. It was then seen snatching several dragonflies from the sky alongside other Peteinosaurus. That demonstrated the idea that the hunter has become the hunted. In the middle of the dry season, a Peteinosaurus was seen risking a quick bath in a puddle.

Peteinosaurus made a minor cameo in the first episode of the series as one of the first flying reptiles in Earth's history. 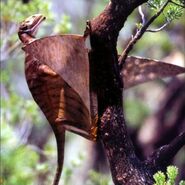 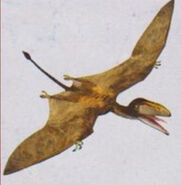