Walking With Wikis
Register
Don't have an account?
Sign In
Advertisement
in: Theropods, Birds, Coelurosaurs,
and 15 more


Phorusrhacos, commonly known as a Terror Bird, was a large, flightless bird from the Pliocene to the Pleistocene. It was the top predator of its region until other predators from North America migrated to South America.

Phorusrhacos was a large, carnivorous bird. It possessed a large beak which was hooked at the tip, like a modern eagle. At the top of its head was a small plumage of feathers.

This bird, since it was flightless, had only small wings that were unable to lift it into the air. However, unlike most modern birds, it possessed a sharp claw on the wings, making them into potential weapons against prey and rivals.

The legs of Phorusrhacos were skinny and long. On its feet were sharp talons.

In Walking with Beasts, Phorusrhacos had a white neck and underbelly. The rest of its feathers were brown. Its beak and legs were a vivid red color. It also had some black display feathers on its head.

Phorusrhacos was a member of a lineage of carnivorous flightless birds commonly nicknamed "terror birds". This name is derived from their metabolism and weapons. At 10 feet (3 meters) tall, Phorusrhacos was one of the largest and tallest of the lineage, behind only Kelenken, which grew 13 feet (4 meters) tall.

Its most lethal and formidable weapon was its large beak. Unlike modern flightless birds like ostriches, its head and beak were large. At the end of its beak was a sharp hook, similar to that of modern birds of prey. This deadly weapon was most likely used to puncture the head of its prey and to cause major brain damage. The shock of the impact would instantly kill it.

Although the first terror birds appeared on the planet back in the Eocene, Phorusrhacos and its relatives belonged to a different family than the Gastornis, also featured in Walking with Beasts.

A pair of Phorusrhacos chased a Smilodon cub. The birds managed to trip up the cub but unfortunately for the terror birds, Half-Tooth appeared and warded off the attackers of his cub. The pair later stood by a herd of grazing Macrauchenia.

After a pride of Smilodon performed a successful kill on a Macrauchenia, a flock of Phorusrhacos appeared from the surrounding woodland. Whilst most of the birds stood far away from the cats, one stole a slab of meat from the carcass and the rest of the birds flocked around the carrion. When the Smilodon left, the Phorusrhacos fed on the remaining scraps.

After another successful kill by the Smilodon pride, the Phorusrhacos waited for the cats to have their sitting.

Whilst a now-solitary Half-Tooth stalked a mother Macrauchenia and her child, a Phorusrhacos quickly rushed from the woods and swiftly killed the juvenile. Unfortunately for the terror bird, Half-Tooth warded it off and claimed the carcass.

After a fight between Half-Tooth and one of The Brothers, a pair of Phorusrhacos fed on the corpse of the brother who died as a result of the fight.

Phorusrhacos appears in the Battle of the Beasts online game where it is a playable fighter or its parts could be used to create an entirely new creature.

Phorusrhacos never lived during the Pliocene and Pleistocene. It actually lived during the Miocene, as did other phorusrhachids. However, the only phorusrhacid with those attributes is Titanis, and it was believed to have been another species of Phorusrhacos at first,[1] but Titanis is only known to live in Florida and Texas. Additionally, the Phorusracos are shown running away from Smilodon populator a lot more than they should, while in reality there should be plenty of evidence that shows that Titanis commonly fought and even killed Smilodon fatalis, thus remaining as the top predator of its time.

Phorusrachos had a shorter neck than how it is depicted in Generation 1 of Walking with...

Stock footage of Phorusrachos was reused in the Animal Planet series The Most Extreme in the episode Awesome Ancestors. 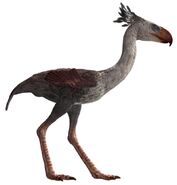