Walking With Wikis
Register
Don't have an account?
Sign In
Advertisement
in: Article stubs, Walking with Beasts Animals, Sea Monsters Animals,
and 17 more

Physogaleus was a very small Eocene shark featured in the Impossible Pictures' series Walking with Beasts, where it is seen hunting fish in the open ocean, being preyed on by Basilosaurus, and living in mangroves, where they ate Apidium, but were too small to attack Moeritherium, Arsinoitherium, or any other very large animals.They also appear in the book version of Sea Monsters, in the Eocene portion, where they attempted to steal a Basilosaurus' kill. 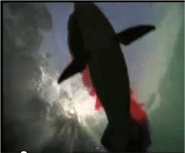