Two big tusks to dig up roots and a beak

Walking with Dinosaurs (New Blood)
Sea Monsters (time map)
Placerias is a genus of dicynodont, a stem-mammal, which lived during the late Triassic period in what is now North America.

Placerias lived during the Triassic period, some 220-216 MYA, and was shown in large herds near riverbeds where they found food and water. The Placerias were up to 3 meter long an weighted 1-2 tones and were said to behave like modern hippos, spending much of its time during the wet season wallowing in the water, chewing at plants near river side.

The show said how they lived in huge herds, the impressive one-ton beasts were not related to dinosaurs. Instead they were synapsids, close relatives of the modern mammals. Once there were many different varieties of these powerful creatures

swaggering across the landscape. But, eventually, Placerias became one of the last representatives of their kind that remained in the late Triassic. They were an "endangered species" as said by the narrator. Despite their fearsome appearance, they were actually a kind of gentle herbivores. Their tusks were used for digging up roots. For angry males, these tusks could be lethal weapons. For the swift Coelophysis, Placerias were challenging prey. In the heat and dry season, Placerias spread out over scrubland to feed. When in danger, Placerias moved desperately slow.

They had little protection against large predators such as Postosuchus except their size, numbers and tusks. They had beaks and tusks that were used to dig for roots, but could be used for self defense and to intimidate as well. During the dry seasons, when rivers and lakes dried out, Placerias gathered in large groups and migrate to find food and new home. It was a relative of Diictodon and Lystrosaurus from WWM (Walking with Monsters).

A herd of Placerias was seen traveling from the hill to the local river for their morning drink. Whilst most of them drank, two males were seen fighting with their sharp tusks. Then a female Coelophysis was seen watching the herd pass by, waiting for sick and old individuals. However, one Placerias didn't tolerate the Coelophysis' presence.

In the heat of the dry season the herd spread out and fed on the scrublands. But, then, suddenly, a female Postosuchus ambushed the herd and wounded a member. The carnivore followed down the limping Placerias until it succumbed to its injuries. The Postosuchus then fed on the corpse. Further into the dry season, the herd was seen bathing in the local river to cool down. However, they were very alert as it was the perfect area for an ambush.

Later into the dry season, the herd was seen digging for roots underneath the prairie. However, nearby was the female Postosuchus, preparing to hunt. Yet because of a injury caused by a Placerias in a previous hunt, she was handicapped. She attempted to ambush the herd but the herd noticed her before she could execute the attack. The herd mounted an aggressive display and warded her off.

When the dry season got worse the herd migrated in search of food and water and some maybe died out in the process alongside the rest of the species. 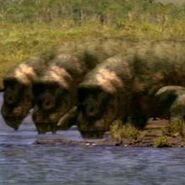 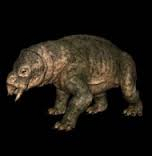 Placerias (Official Sticker Album)
Add a photo to this gallery

Retrieved from "https://walkingwith.fandom.com/wiki/Placerias?oldid=64559"
Community content is available under CC-BY-SA unless otherwise noted.