Walking With Wikis
Register
Don't have an account?
Sign In
Advertisement
in: Creatures in New Blood, Creatures in Walking with Dinosaurs: Inside their World, Creatures in The Arena Spectacular,
and 18 more

Large with a shorter neck than its descendants; quadrupedal and bipedal

Triassic period
221 to 210 million years ago


Plateosaurus was a large dinosaur from the late Triassic period. This creature was an early ancestor of the Jurassic leviathans - the sauropods.

This animal was a peaceful plant eater that would travel in large herds across continents for food.

Plateosaurus - an ancestor of the sauropods - was a large, four-legged dinosaur. It is unknown what exact position it walked in but it may be safe to assume that it was a faculatively bipedal creature. This posture is incredibly different compared to the later sauropods.

The neck of Plateosaurus was short compared to its successors. The reason for this may be that if its neck was any longer, the weight of it would not be supported by the rest of its body. However, despite this minor downfall, it was still able to browse on many different types of vegetation including cycads and low-lying shrubs, using its chisel-shaped teeth.

Plateosaurus was mainly dark green, save for several white stripes along its back and a lighter tint on its underbelly.

For the protection of younger individuals, Plateosaurus would travel in large herds. Since these creatures were so large, the adults were nearly indestructible. However, while on their own younger Plateosaurus were prone to be attacked by primitive theropod dinosaurs and rauisuchians.

Due to them being so large, they would also need to feed on lots of vegetation each day. Their ceaseless search for food would often lead them to foreign areas and continents. Once the area is depleted of a sustainable amount of food, the lumbering herbivores would move to new feeding areas.

After a long drought, a small group of Coelophysis gathered at a small waterfall to drink. However, the peace was broken when a large herd of Plateosaurus began to cross the water. The leader of the herd was confronted by a pair of Coelophysis but due to its immense size, the carnivores quickly bolted.

A mother Plateosaurus and its three chicks are featured in in the arena show.

Plateosaurus is one of the dinosaurs featured in this app.

A Plateosaurus scaring away a Coelophysis 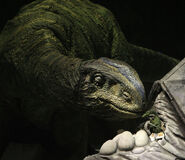