During the Pleistocene, the world was, and still is, going through extreme periods of hot and cold.

The Pleistocene, or the Pleistocene epoch (derived from the Greek words Pleistos - most numerous and Kainos - new), also known as The Ice Age, is the first epoch of the Anthropogene or the last epoch of the Neogene (opinions vary). It is chronologically located between the Pliocene Epoch and the Holocene. It began roughly 1.8 MYA and ended about 10,000 years ago, so it lasted for about 1.8 million years.

The Pleistocene is notable by the continuing cooling of the climate, which began in the Pliocene, marked by Ice Ages, especially in the North, followed by a gradual and temporary warming of the climate. As a consequence, the sea levels fell and rose depending on the spreading of the ice sheets. The plants of the Pleistocene were similar to the modern species, but very distributed differently, mostly due to the ice sheets in the north.

The mammals of Pleistocene underwent significant changes: this was the epoch of the Woolly mammoth, the Woolly Rhinoceros, the reindeer, the cave bear and other representatives of the so-called "Mammoth Fauna" - most of it died out at the end of the Pleistocene. It was slightly different in the south, especially in South America, where the climate was more stable and less cold; some southern animals survived till the modern times, changing little in the process.

Finally, the Pleistocene is marked by the human evolution, from Homo Ergaster to the modern humans. At the same time, the human culture also underwent an evolutionary shock, going from the relatively primitive to more highly developed.

The period's brief appearance in Walking with Dinosaurs. 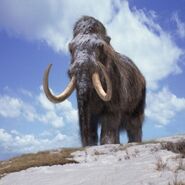 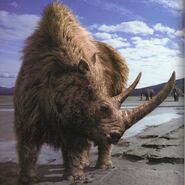 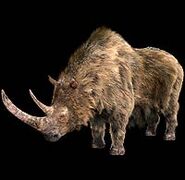