Walking With Wikis
Register
Don't have an account?
Sign In
Advertisement
in: Dinosaurs, Carnosaurs, Creatures,
and 19 more

Walking with Dinosaurs: Spirits of the Ice Forest


The Polar Allosaur/"Allosaurus" robustus was a small allosaur from the Cretaceous. It was a smaller, early Cretaceous relative of the Allosaurus.

Polar Allosaurs were small theropods that had large heads lined with sharp teeth. Above the eyes was a flat, hard, relatively small, head crest.

Like the other carnosaurs, the Polar Allosaur had large, thick legs as well as relatively large arms with three digits per hand.

In Walking with Dinosaurs, the Polar Allosaur was green with yellow stripes and splodges.

Polar Allosaurs were the Cretaceous descendants of the Jurassic killer Allosaurus and its relatives. During the early Cretaceous, Polar Allosaurs migrated to the south and settled in Australia and even Antarctica. Polar Allosaurs were the top predators in their ecosystem. They were able to hunt nearly anything - from the small Leaellynasaura to the large Muttaburrasaurus. With their sharp teeth which were mementos of a bygone golden age, they could slice through the toughest hide.

Similar to the Jurassic Allosaurus, Polar Allosaurs were social hunters as they were solitary, hunting in packs to help bring down larger prey such as Muttaburrasaurus. However if two of the same kind came in contact over a circumstance such as food or already established territory, they would not tolerate each other's presence.

Spirits of the Ice Forest

Whilst a clan of Leaellynasaura were assembling nests, a Polar Allosaur watched in the background. However, whilst edging closer, it accidentally stepped on a small stick and spooked the small herbivores. As the little dinosaurs scattered, the Polar Allosaur attacked and crashed into a tree, knocking it over. As its prey bolted, the predator abandoned the hunt. When a vast herd of Muttaburrasaurus were at the lakeside drinking, a Polar Allosaur appeared from the forest. As the Muttaburrasaurus tried to intimidate the intruding carnivore, the Polar Allosaur ran away, across the shallow waters. It then returned to the forest.

Later, an old Muttaburrasaurus had been brought down and a male Polar Allosaur came to the festering carrion to feed. However, a female Allosaur also came to the carcass to feed. Unfortunately for the female, the male warded off the female and she only managed to tear off a small slab of flesh.

In Autumn, a Polar Allosaur stalked the Leaellynasaura clan. However, due to the noise being produced by a nearby Muttaburrasaurus herd, the small herbivores couldn't hear the predator. The clan scattered, but because of their late reaction, the dominant female was caught by the Allosaur. Once killed, the carnivore decapitated the Leaellynasaura and ate her head before moving on to the rest of the corpse. 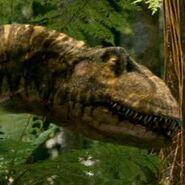 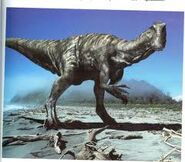 The Polar Allosaur featured in the episode is simply a recycled Eustreptospondylus with a different skin pattern. The animal was intended to represent ”Allosaurus” robustus, a fragmentary species assumed to be similar in appearance to Allosaurus. In recent years, the astragalus is now thought to have either belonged to an abelisaurid or a megaraptoran, a little-known clade of theropods possibly related to tyrannosaurs

BBC Nature has confirmed on the Polar Allosaur page that the dinosaur is Australovenator.[1] It is currently placed in Megaraptora whose relationships are disputed, with some saying that they were closely related to allosaurs while others say tyrannosaurs. Recent fossil material of a juvenile Megaraptor, a member of Megaraptora, suggests they are tyrannosauroids.[2]

The Polar Allosaur was the first dinosaur that Daren Horley worked on during the production of Walking with Dinosaurs in early 1997.[3]