Walking With Wikis
Register
Don't have an account?
Sign In
Advertisement
in: Carnivores, Walking with Dinosaurs Animals, New Blood animals,
and 19 more

Walking with Dinosaurs (New Blood)
Postosuchus is a genus of rauisuchian reptile that lived during the late Triassic period throughout what is now North America. It is sometimes referred to as the T-Rex of the Triassic.

It is top predator of Triassic period, up to 6 meters long and 2 meters high. The main diet of Postosuchus consisted of dicynodonts, (as seen in the episode) and other animals smaller than itself. Postosuchus were fiercely territorial and ready to fight to death if another member of their own species ventured into their territory.

A merciless ambush predator, Postosuchus was the largest carnivore of its time. It was a distant cousin of the dinosaurs, evolved from the same reptilian ancestors. They were easily fast enough to keep pace with a herd of Placerias. Heavily built with an armored back, they needed a huge amount of food and therefore had to defend a very large territory. The only creatures they usually feared were other members of their species.

It is now theorized that it may have been a bipedal walking reptile, at least some time.

The Postosuchus once again was hunting the herd of Placerias. However, a previous hunt has left her a severe stab wound in her left thigh, leaving her handicapped. When attempting to execute an ambush the herd noticed her and aggressively warded her off. When she returned to her territory, she encountered a male Postosuchus. She was, however, too weak to fight and lost her territory and pride.

A flock of Coelophysis later encountered the female Postosuchus slowly dying from her injuries. The Coelophysis remained far away from the animal until she finally died. The flock then ate her corpse from the inside out.

A toy of Postosuchus was made by Toyway for their Walking with Dinosaurs line. 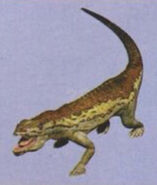