Slender body; sharp teeth; amphibious; could surge out of the water


Proterogyrinus was an anthracosaur amphibian from the Carboniferous. It was the top predator of its ecosystem.

Proterogyrinus was a slender amphibian. It had black with white stripes running down its spine. It had splayed out legs and five digits on each foot. It had small, needle-sharp teeth inside relatively large jaws. It had yellow eyes.

Proterogyrinus was quite similar to its Devonian ancestor Hynerpeton (or rather, Ichthyostega). It had thin skin so it had to say close to water as the oxygen from the water would help its respiratory system function properly. However, it was allowed to stay out of water for longer intervals than its ancestor. It also had a flat tail designed to make it a powerful swimmer.

Unlike Hynerpeton, Proterogyrinus was the top predator of its time. It fed on the large arthropods that were around during the Carboniferous, such as the car-sized Arthropleura and the eagle-sized Meganeura. Proterogyrinus was also very aggressive, especially in groups. They would constantly screech at each other and would often fight.

In the event of a major forest fire (which were common during the Carboniferous), Proterogyrinus had the upper hand as it lived mostly in water. The water would guard it from the flames. Also, as most of the terrestrial creatures would panic, they would take advantage of the opportunity and would hunt them. They had the ability to surge out of water, so it could even hunt Meganeura as they scattered for safety.

A group of Proterogyrinus was basking on the banks of the local lake as a homeless Mesothelae appeared. However, the vociferous amphibians scared off the spider.

Shortly after, an Arthropleura came to the lake and a Proterogyrinus confronted it. As the amphibian tried to attack the arthropod, the Arthropleura reared up. The amphibian then pushed it over onto a sharp rock. The impaled Arthropleura's carcass was then eaten.

When a storm approached, and as lots of Meganeura scattered above the lake, some Proterogyrinus surged out of the water and ate several of the dragonflies. 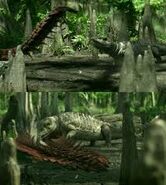