Walking With Wikis
Register
Don't have an account?
Sign In
Advertisement
in: Dinosaurs, Ceratopsians, Chased by Dinosaurs Animals,
and 19 more

Protoceratops is a sheep-sized (1 to 2 meters long) dinosaur, from the Upper Cretaceous period (From about 75-71 MYA) in what is now Mongolia.

Small with a beak and frill.

It was related to Pachyrhinosaurus, Triceratops and Torosaurus, but was smaller than they and had just a small bump on its face instead of horns. Protoceratops probably used this small bump, beak and social living to protect itself from predators like Velociraptor, probably fleeing from the larger Qianzhousaurus instead. For the same reason, it might have been more active during the nights or twilight, rather than during the day, as indicated by the large-sized eye sockets of its' fossils.

These dinosaurs lived in huge nesting herds. They were so common in their time, that some paleontologists called those dinosaurs “The Sheep of the Cretaceous.” Although Protoceratopses were small-sized vegetarians in the dinosaur world, they're about six feet long, the size of a modern pig or sheep. They had really powerful beaks, and a bite from one of those could snap an arm or a leg. Their jaws were really formidable.

They had a brownish color in the series, lived in nesting groups, often clashed for territory with each other, were belligerent. They are nicknamed Cretaceous Sheeps.

Protoceratops was featured in the second episode of Chased by Dinosaurs, where it was one of the more common inhabitants of prehistoric Gobi Desert, and it was preyed mainly by Velociraptor and, possibly Tarbosaurus.

Protoceratops is one of the viewable dinosaurs in the app.

In the forth chapter, a Protoceratops named Fern adopts a young Tarchia named Rose. 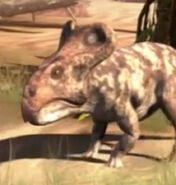 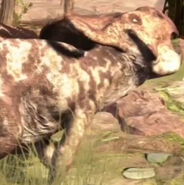 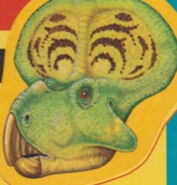