Walking With Wikis
Register
Don't have an account?
Sign In
Advertisement
in: Pterosaurs, Chased by Dinosaurs Animals, Sea Monsters Animals,
and 26 more

Large with a crest

Chased by Dinosaurs (Land of Giants)
Sea Monsters (Sea Monsters, Episode 3)
Walking with Dinosaurs: Inside Their World
Pteranodon is an genus of large pterosaur that lived during the late Cretaceous period throughout what is now North America and possibly Europe.

Pteranodon had a toothless beak. This suggests that Pteranodon lived primarily on fish and other small marine animals. Pteranodon also possessed a cranial crest. The size of the crest differentiated between genders and species of Pteranodon.

The wings of Pteranodon, though large, were more fragile than bird wings, and much more thin. They were leathery and naked (the body of Pteranodon was possibly covered in fur) and could be easily damaged. A ground Pteranodon was vulnerable both to predators, such as Tyrannosaurus rex and to starvation.

Although Pteranodon was not related to birds, it lived in a manner similar to the modern sea birds, such as the albatross. To escape predators, to catch the thermals and to be close to the sea, Pteranodon lived and nested on top of high coastal cliffs and mountains. There it nested and raised its young.

Pteranodon was a fish-eater, and hunted out at sea, far away from the coast. There, it either dove into water like the modern gannets, or picked fish from the surface of water, like the frigate birds and the albatross. In its turn, it was prey both to large marine reptiles like Tylosaurus and to large fish like Xiphactinus.

In a desperate attempt to locate the whereabouts of the Argentinosaurus herd, Nigel Marven went as far as the open ocean to find them. There, he encountered a large flock of Pteranodon roosting and feeding on the high cliffs near the shore. He slowly approached an old male Pteranodon who was busy digesting a fish. 8 feet away from the pterosaur, he watched other members of the flock fly over the surface of the water and catch fish. As the old male took to the wing, Nigel threw a fish down the cliff where another Pteranodon caught it. He did the same with another Pteranodon on the beach. The next day, in another attempt to find the Argentinosaurus herd, he took to the sky with an ultralight, aiming to have a bird's eye view of the landscape, giving him a better chance in locating the sauropods. Whilst doing so, he flew with the Pteranodon flock. He then broke away from the flock to fly with an Ornithocheirus - a larger pterosaur.

Whilst Nigel was searching for mosasaurs, he encountered a flock of Pteranodon flying alongside The Ancient Mariner. In the distance, a Xiphactinus narrowly missed catching a Pteranodon, proving that in the Cretaceous, not only do the pterosaurs catch fish, the fish sometimes catch them. Later, it was shown that Nigel had kept one as a pet. Nigel was seen feeding it before checking out the boat's cameras and getting a glimpse of a pod of Elasmosaurus. Later, when Nigel's boat was capsized by a family of Tylosaurus, the Pteranodon was seen screeching.

Pteranodon is one of the viewable pterosaurs in the app.

Pteranodon being attacked by a Tylosaurus 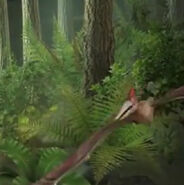