Walking With Wikis
Register
Don't have an account?
Sign In
Advertisement
in: Pterosaurs, Article stubs, Carnivores,
and 7 more

Pterodaustro was a pterosaur, famous for its feeding style, similar to that of the modern whales and flamingos. It appears in Wonderbook: Walking with Dinosaurs.

Pterodaustro is a genus of Cretaceous pterodactyloid pterosaur from South America, which lived there 105 MYA. It was roughly 1.3 m in length and it lived near water. It fed on small animals, catching them by sifting its beak through the water, in the shallows or while floating. It was possibly pink in color due to the nutrients found in the plankton, just as the modern flamingos are, but on the other hand "ptero-fuzz" might not have been able to have such colors.

Pterodaustro was featured in Chapter Two : March of the Titans in which it is inaccurately shown trying to eat hatchling Argentinosaurus. A male and a female are seen dancing as the male impresses the female before both are scared of by an Argentinosaurus named Thunder. They are seen flying about and nesting throughout the rest of the chapter. 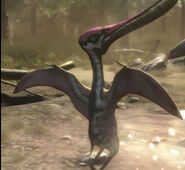 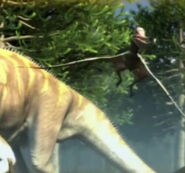