Walking With Wikis
Register
Don't have an account?
Sign In
Advertisement
in: Pterosaurs, Walking with Dinosaurs: The Movie Animals, Creatures,
and 30 more

Features similar to other Azhdarchids but with a large crest

Walking with Dinosaurs (Death of a Dynasty)

Quetzalcoatlus (meaning “feathered serpent god lizard”) was a magnificent giant flying reptile, possessing an 13-15 meter (43-50 foot) wingspan and weighing 250 kg. It was the largest pterosaur of all Earth's history and thus the largest flying vertebrate of all time, as far as we know.

Quetzalcoatlus lived 75-65 million years ago in North America, making it one of the last pterosaur species to exist as well. It was long thought Quetzalcoatlus probably fed on carrion or hunted ammonites, fish and crustaceans in the shallow seas of the Late Cretaceous North America. But new research by Mark Witton and Darren Naish revealed that they were actually giraffe-shaped, stork-like creatures, terrestrial stalkers that fed on small animals they picked up off the ground. It has been suggested at least once that it is actually non-diagnostic, and is in fact a nomen dubium instead.

Death of a Dynasty In the last episode of Walking with Dinosaurs, a Quetzalcoatlus is shown taking a drink while being stalked by a Deinosuchus; still, its primary role was to be the token pterosaur of that episode, allowing the narrator to explain that the skies of the future will belong to the birds.

Quetzalcoatlus appeared in the film, in the backround of many scenes. A flock lf them are seen fleeing from a forest fire. In a later scene, Gorgon the Gorgosaurus catches one by the foot and kills it before the rest of his pack start feeding. When two baby Pachyrhinosaurus named Patchi and Juniper are on the beach, a pair of Quetzalcoatlus come close to them and eat the nearby crabs, spooking the young dinosaurs. Years later when Patchi is an adult and pinned down by a tree after losing in a fight with Scowler, a pack of Troodons followed by two Quetzalcoatlus appear to eat the Pachyrhinosaurus. While the savengers fight, Patchi gets back up and scares away the predators.

Quetzalcoatlus is one of the viewable pterosaurs in the app.

It was featured in concept art for Wonderbook: Walking with Dinosaurs but ultimately didn't make the final cut. 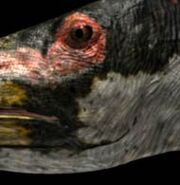 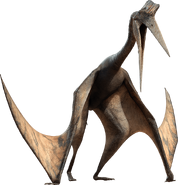 A Quetzalcoatlus coming across Patchi and Juniper.

The Quetzalcoatlus catch the crabs while the Pachyrhinosaurus flee.