Walking With Wikis
Register
Don't have an account?
Sign In
Advertisement
in: Pterosaurs, Walking with Dinosaurs Animals, Sea Monsters Animals,
and 21 more

Sea Monsters: Prehistoric Predators of the Deep
Rhamphorhynchus was a coast-dwelling pterosaur featured in the third episode of Walking with Dinosaurs.

Rhamphorhynchus was a small, long-tailed pterosaur from the Jurassic period (154-137 MYA). It had needle-like teeth for catching fish. Its wing span was roughly 2 meters (6 feet) wide. They were very capable flyers. Rhamphorhynchus fed mostly on fish, insects, and their larvae, but they also appeared to like horseshoe crab eggs. This modest-sized pterosaur was fairly wide-spread and successful. As a species of sea-dwelling pterosaurs, they evolved a unique way of catching fish without getting their wing membranes wet. Their method of catching fish was dip-feeding, lowering their bill into the water when they see fish, and catching them. The teeth of these flying reptiles may`have looked bizarre, but they were ideal for snatching slippery fish in the water. However, swallowing their catch was a different matter. The role of Rhamphorhynchus was probably like birds who live on sea coasts today: to clean the beach of the carcasses of dead animals. 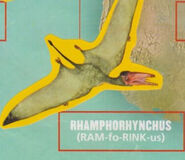