Sabre Tooth is the 5th episode of Walking with Beasts and follows Half-Tooth and his clan now ruled by The Brothers.

The fifth episode shows the strange fauna of the isolated continent of South America and explores the effects of the Great American Interchange, which had happened 1.5 million years earlier. Since South America had drifted apart from Antarctica 30 million years ago, many unique mammals had evolved, including Doedicurus, an armored armadillo-like mammal with a cannon ball-sized spiked club on its tail; Macrauchenia, a camel-like mammal with a long trunk; and Megatherium, a massive ground-dwelling sloth.

Before the continents of South America and North America collided, a 10-foot-tall predatory bird called Phorusrhacos, had reigned as top predator. However, the great cats, migrating from the north, soon displaced them as top predators. The episode focuses on a male Smilodon, a saber-toothed cat, called Half Tooth, whose leadership of a pride is threatened by two males who are brothers and work together against him. The rival males ultimately chase off Half Tooth (actually Half Tooth backs off wisely without any serious injuries, feeling that the two males would be too strong for him), kill his cubs, and take over his pride.

Next, the episode shows Smilodons hunting down Macrauchenia and trying to protect the young from the two brothers (in vain). In the background, "Terror Birds" still hunt, but give way to the Smilodon. However, a Megatherium, who wanted to eat meat as diet supplement, charges the pride of Smilodon, in order to eat some of the carrion. In the process, the Megatherium kills the dominant rival male, enabling Half Tooth to return, kill the other male and reclaim his territory. Then he had another litter of cubs. 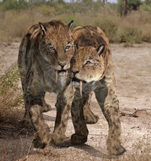 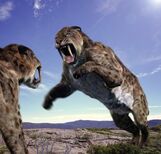 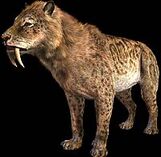 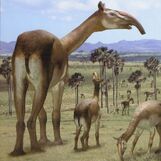 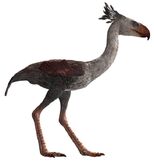