Walking With Wikis
Register
Don't have an account?
Sign In
Advertisement
in: Chased by Dinosaurs Animals, Herbivores, The Giant Claw animals,
and 16 more


Saurolophus was a Laurasian hadrosaur that weighed 7 tonnes and grew 12 meters long, lived during the Cretaceous 69-68 MYA, had a crest, and was a cousin of the North American hadrosaur Maiasaura, but only distantly related to Parasaurolophus itself.

Being a gigantic species of Mongolian, Late Cretaceous hadrosaur – at nearly 40 feet long - Saurolophus was the biggest plant eater of its time and place. Those animals could be nearly 8 tons and had to pack in much vegetation. That's what makes "duck–bills" special – they're one of the few dinosaurs that can actually chew. No dinosaurs could move their jaws like humans can, but what the duck–bills did was that they had a battery of teeth - there can be over 2,000 teeth in their mouths- and they slammed the lower jaw into the upper jaw, the bones distorted and they ground the vegetation between that battery of teeth.

Curiously, the snout of Saurolophus itself was rather narrow, especially for a hadrosaur, perhaps implying that it was a picky eater. Saurolophus also had a spike or a spine at the back of its head, though the reason for this ornament isn't yet established by science; the most likely explanation is that hollow spike helped Saurolophus to make specific sounds to differentiate it from other hadrosaurs, or that it supported a fleshy sail at the end of the dinosaur's head during its' life. (This point of view isn't supported by the show.)

Saurolophus was one of the dinosaurs encountered by Nigel Marven in late Cretaceous Mongolia - the Gobi Desert. This episode demonstrated the hadrosaurs' effective chewing system and showed that Saurolophus was equally comfortable among the dunes and in the riverside valleys. It was also one of prey animals of Tarbosaurus and possibly Velociraptor as well. Later near the end of the episode, it is seen at the water hole before getting scared away by Tarbosaurus.

The model for Saurolophus is actually an edited and recolored version of that of Anatotitan.

Saurolophus is one of the viewable dinosaurs in the app. 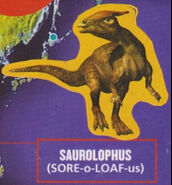 The Land Before Time

Read more at the The Land Before Time Wiki