Macrauchenia and other herbivorous animals, occasionally its own kind

Walking with Beasts (Saber Tooth)
Smilodon, also called "The Sabre-Tooth Cat", as well as previously and mistakenly called "The Sabre-Tooth Tiger", was one of the largest and powerful sabre-tooth cat of all time, and one of the most famous prehistoric cat. It lived in South America from 2.5 million to 100,000 years ago. Originally from North America, Smilodon migrated to South America 2 MYA and replaced the native hunters, Phorusrhacos, as top predators. Smilodon was between 100 to 500 kg depending on the species.

There is no such thing as a Sabre-Tooth Tiger. The correct name for these beasts is Sabre-Tooth Cat. There have been many different species, including Dinofelis, featured in the WWB episode "Next of Kin". The largest, at 300 kilograms, was Smilodon, which means “Knife Tooth”. A million years ago, Sabre–Tooth Cats were once the top predators in North America. Originally from North America , they came to South America two million years ago. The balance of life in South America changed as they became and took over the role as the top predators. As they spread down from North America, they took over from one of the strangest predators the world has ever known, a ten–foot–tall killer bird called Phorusrhacos.

Fossils at the La Brea tar pits in California show that it may have lived and hunted in packs of varying numbers called prides, as shown in Walking with Beasts, episode 5, "Sabre Tooth". Thus, they could have behaved so much like modern lions, with females doing most, at least 90% of the hunting and males most of inner-species fighting. When hunting, the females hunted together as a pack, inching forward to set the trap. They could stalk herds of animals for hours. Gradually, they fanned out with the lead female moving wide – trying to encircle their prey. Smilodon were powerful killers and these cats had amazing bursts of speed and were able to accelerate explosively, only over a short distance as they were not built for long chases. Unless they got close, they didn't stand a chance. One false move and they would have to start all over again.

Smilodon's best-known feature is its sabre-like teeth. They were long and thin, almost dirk-like in their shape. These cats used these teeth to slice through flesh and blood vessels of their prey with an almost surgical precision. These sabres were also delicate, and the cats often immobilzied their prey (such as Macrauchenia) beforehand. As a result, Smilodon were very large, very solid cats, built to wrestle their prey into submission rather than to chase it down - in Walking with Beasts these cats were shown hunting in packs, with one cat after another taking over the chase of the prey animal as the previous pursuer got tired, and all of them immobilizing the Macrauchenia when it was caught to prevent the sabre breakage.

The sabre teeth were also useless when it came to actually chewing the meat, and Smilodon used their sharp carnassial (cheek) teeth for that purpose instead. Even so, Walking with Beasts suggested that Smilodon kills were very wasteful with plenty of meat left behind - something that scavengers like the terror birds were quick to take advantage of.

Once they charged at their prey, they would erupt out of the grass. The lead female drove the prey towards the other females. The sabre-teeth of the animal were used to bite the prey's neck, destroy the blood vessels and strangle the windpipe. With just one bite, the prey quickly died. It was those huge incisor teeth which made Smilodon such a successful, albeit specialized killer. However, these were the original double-edged swords. The lethal, 20 centimetered saber-teeth were actually quite delicate and fragile. Smilodon couldn't bite into bone, and so they ate only the soft fleshier parts of the body. This was very wasteful, and thus other creatures, like the terror birds and Megatherium(a giant ground sloth of South America), often scavenged at the cats' kills. Smilodon had evolved to hunt large herbivores like Toxodon and Macrauchenia in South America, while in North America it hunted woolly and Columbian mammoths, Hagerman Horses and giant camels, steppe bison and prehistoric xenarthrans (ground sloths and glyptodonts), so when they began to die out and be replaced by smaller, modern herbivores like the pampas deer of South America, it too died out.

Smilodon were very successful predators, and survived up until as recently as 10,000 years ago, but eventually, the world around them changed too much. The climate became cooler and drier. The larger prey they specialized in killing disappeared. The sabre tooth world came to an end.

In addition, the fifth episode of Walking with Beasts showed how a pair of Smilodon males took over a pride and killed the original youngsters, so that the females would accept them and raise their own offspring, again just like modern large predators such as lions. 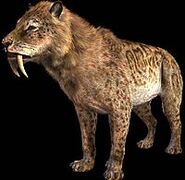