Walking With Wikis
Register
Don't have an account?
Sign In
Advertisement
in: Dinosaurs, Spinosaurids, Dinosaur Gallery Animals,
and 22 more

Spinosaurus is a genus of large theropod dinosaur which lived during the late Cretaceous period in what is now North Africa.

Spinosaurus was one of the if not the[2] largest of the theropod dinosaurs. It reached lengths of up to 16-18 meters (53-60ft),[1] heights of 5[1]-7[2] and weighted up to 10[1]-20[2] tonnes (11-22 tons). It also could reach speeds of up to 40kph.[2] A unique aspect of Spinosaurus was its sail, which could have been used to either attract mates, regulate its body temperature,[1] or simply to intimidate enemies Another unique characteristic is its crocodile-like snout that had interpreted to be adaptations for aquatic hunting, such as the nostrils facing upwards and a secondary palate for breathing concurrently while eating. Its teeth were conical, assumed to be; ideal for catching fish.[2]

Spinosaurus had no known rival species other than; presumably; Sarcosuchus; which is uncertain if it lived in the same time period with Spinosaurus.

[1] Spinosaurus lived mainly in the mangroves and floodplains of Africa[2] hunting any available prey item such as larger species of fish, as well as any terrestrial animals[1] [2] such as Suchomimus, Ouranosaurus, and Carcharodontosaurus .[1]

Spinosaurus is one of the viewable dinosaurs in the app. It can be seen killing a Suchomimus in the section What were the Dinosaurs? and in the main menu.

Spinosaurus was originally supposed to appear in the Wonderbook appearing in concept art. However it was cut from the final game for unknown reasons. It did appear in a quiz in the first chapter.

Spinosaurus is most famous for its appearance in Jurassic Park III where it was the dinosaur antagonist in the film and was strong enough to kill a Tyrannosaurus rex.

Unlike would is shown in Walking with Dinosaurs: Inside Their World, Spinosaurus probably did not have the jaw strength and possibly the neck muscles to single-handedly lift an adult Suchomimus into the air using only its jaws. Also in the app, Spinosaurus' hands are depicted as being able to pronate, which all theropods did not have.

In the BBC Earth profile there is a mention of a Spinosaurus specimen found with an Iguanodon specimen in its stomach. Though this specimen is real it was not a Spinosaurus, rather it was Baryonyx a close relative.

Like most theropods in the Walking with... series, it is depicted with hands that can pronate, when there has been evidence in recent years that show that theropods could not pronate their hands.

In 2014, a hypothesis reveals that Spinosaurus actually had short legs and was mostly aquatic, possibly walking like a duck or a pelican when on land. Its sail was differently shaped than previously thought, having a kink in the middle, though this is not confirmed; and lately the aquatic thesis fallen out of favor; as latest hypothesis reveals the Spinosaurus would unlikely be as aquatic as one suggested.

However in 2020, nearly complete Spinosaurus tail vertebrae is recently recovered from the kem kem beds, and that reveals that its tail was differently shaped than previously thought, more like a newt or a crocodile, and it is confirmed that Spinosaurus would likely be able to swim or dive for hunting.

Meanwhile in 2021, the research has found out that the aquatic association for Spinosaurus in highly inaccurate as well as inconsistent, and interpreted that Spinosaurus was a shoreline generalist, more akin to wading avians like Shoebills, Herons, Storks, Pelicans, Giant Petrels, Skuas and such species. 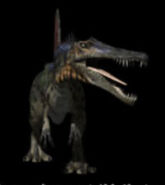 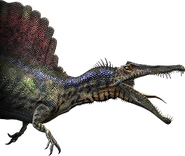