Walking With Wikis
Register
Don't have an account?
Sign In
Advertisement
in: Walking with Dinosaurs Animals, Herbivores, Armoured animals,
and 9 more

Stegosauridae is a family of thyreophoran dinosaurs comprising all stegosaurs more closely related to Stegosaurus than to Huayangosaurus.

Their fossil range's extent into the late Early Cretaceous exceeds that of other stegosaurs, such as huayangosaurids, which had died out by the end of the Late Jurassic. 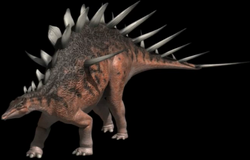 They are characterized by rows of osteoderms along the top of their neck, trunk and tail which graded with varying abruptness from the anterior plates to the caudal spines at a point posterior to the dorsal vertebrae.

These may have had a number of functions: display and/or thermoregulation for the broad flat osteoderms, defense for the spikes.

A reptile named Dravidosaurus was considered to be a stegosaur, but it was later proven to be a sea reptile instead.

Stegosaurus appears several times during this episode. Most importantly, it drives off a pair of allosaurs after they killed one sauropodlet, but it has also killed another in confusion.

Al comes across a mating pair of stegosaurs and is driven away by them.

Stegosaurus (and other dinosaurs from Time of the Titans) appeared at the end of this episode.

Kentrosaurus, (a relative of Stegosaurus), is one of the dinosaurs featured in this app.