Walking With Wikis
Register
Don't have an account?
Sign In
Advertisement
in: Dinosaur Gallery Animals, Creatures, Dinosaurs,
and 29 more


Stegosaurus was a stegosaurian dinosaur from the Jurassic. It is characterized for its distinctive spinal plates and thagomizer.

33 feet (10 meters) long with a weight of 7 tonnes, Stegosaurus was the largest dinosaur of the Stegosaurs, a race of herbivorous dinosaurs armed with plates and spikes. It had a small head with relatively small eyes and a blunt beak for a mouth.

The hind limbs of Stegosaurus were thick and were far larger than its front limbs.

Down the vertebrae of Stegosaurus were spinal plates (or osteoderms) which ran down its neck until near the end of its tail. Each plate had a root-like pattern.

Near the tip of its tail were two pairs of sharp thagomizers. The spikes were slightly curved in shape. This made Stegosaurus different from its relative Kentrosaurus, who had paired spikes throughout the entire length of its tail and on its back.

Stegosaurus was primarily green and yellow with dark green splodges. The spots were outlined with white. The plates were translucent and the rim of the plates was blueish-green.

Stegosaurus, in comparison to the other animals in its environment, was a very odd dinosaur. Its body features and shape were very strange compared to the other Jurassic fauna.

Stegosaurus possessed a long row of spinal plates, which are also called osteoderms, lined down its vertebrae. Within the plates were veins that blood could pump through. The blood flushing into the plates would create vivid patterns and colors. This extraordinary display would used for display and intimidation

Near the end of its tail was two pairs of sharp spikes. This weapon was called a thagomizer. Stegosaurus used its thagomizer to protect itself from predators like Allosaurus. The force of the impact as well as the sharpness of the spikes would deal a devastating blow - breaking bones and impaling the victim.

Stegosaurus was not the brightest of beings. Its skull was small compared to its body and as a result, its brain was tiny as well. Due to its low intelligence, it was unable to probably determine what was dangerous and what was harmless. Stegosaurus would often mistake small dinosaurs as a threat and those unfortunate animals would often be slaughtered. Stegosaurus had nerve ganglia in its hips region. While it wasn't a true 'second brain' as it was initially suggested, it did help the dinosaur to coordinate its movements, especially in its hind legs and tail, for its brain didn't quite manage it.

For Stegosaurus, reproduction was a very complicated procedure, due to its many ornaments.

Stegosaurus was one of the dinosaurs featured in this episode. It played a background role to Diplodocus, but at one point in the episode it came upon a group of sauropodlets when they fed in a valley. The young Diplodocus moved away, but were ambushed by a pair of Allosaurus and had to flee past the Stegosaurus. The near-sighted herbivore was startled and accidentally killed one of the youngsters, before encountering one of the Allosaurus and scaring it away with its thagomizer and blood-filled back plates.

Stegosaurus was a background character in this WWD special. A pair of Allosaurus came upon a dead Stegosaurus stuck in quicksand, and while trying to feed, got trapped and died there too, warning Big Al to stay away by their decomposing stench. Later, Big Al came across a pair of Stegosaurus trying to mate, but was scared away by the male.

In Chased by Dinosaurs

It and Diplodocus can be seen briefly in the introduction of each episode.

Stegosaurus appeared at the end of the episode as one of the descendants of Euparkeria - the dinosaurs.

Stegosaurus appears in the live show.

Stegosaurus was one of the dinosaurs featured in this app.

Stegosaurus is the main focus chapter 3 with a Father named Farallon and a son named Kula.

In 2005, stamps from Liberia reused images of many Walking with... Series animals. Including Stegosaurus.[1] 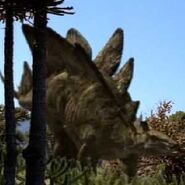 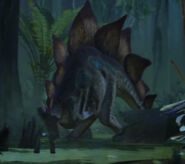 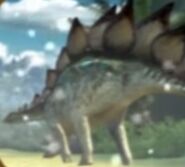 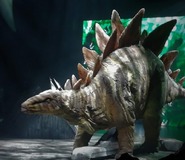