Walking With Wikis
Register
Don't have an account?
Sign In
Advertisement
in: Article stubs, Characters, Walking with Dinosaurs Wonderbook animals,
and 13 more

Storm was an individual Argentinosaurus from Wonderbook: Walking with Dinosaurs.

Storm is the son of Thunder. He first appears when he hatches at the beginning of the chapter. He first meets his father shortly after the latter scares of some nearby Pterodaustro. Later, he grows into an adolescent and the player gets to feed him. Later, he and his father encounter Flint the Mapusaurus and his pack. Thunder scares of the pack by stomping. When Storm becomes a full grown adult, Thunder eventually becomes old and weak and is killed by Flint and his pack, leaving it up to Storm to lead the herd on their migration. Storm leads the herd on their migration through the canyons and confronts Flint and his pack, defeating Flint by knocking him into a chasm, Storm was last seen leading the herd at the end of the chapter.

Storm as a hatchling 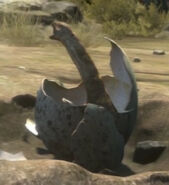 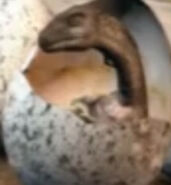 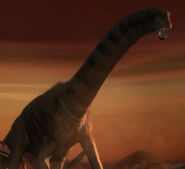 Storm facing off against a Mapusaurus 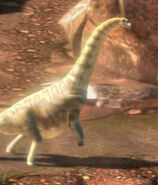 Storm on his rear legs.