Walking With Wikis
Register
Don't have an account?
Sign In
Advertisement
in: Pterosaurs, Creatures from South America, Creatures,
and 15 more

Walking with Dinosaurs: Giant of the Skies
Tapejara was a maritime pterosaur from the early Cretaceous period. It lived on the steep, coastal cliffs of Brazil.

Tapejara was not a pterosaur that would go unnoticed by the naked eye. It had a wingspan of 5 meters (16 feet), slightly larger than an adult human. But the most noticeable characteristic was its large crest, standing 1 meter (3 feet) tall.

This was certainly not used in flight, in fact, it hindered Tapejara greatly, giving it slower movement and to battle high winds for stability on occasion. It is assumed that it was a characteristic only found in males, being used during mating season to attract the opposite gender.

Another unique feature about Tapejara was that it was the first known pterosaur to have developed a toothless beak.

The pterosaur's body was a mixture of black and grey with its head being white, the sides of its face being blue, and its crest being bright red.

Tapejara lived in large flocks of about 1,000. Males of the species had mating leks. Unlike Ornithocheirus, these pterosaurs held leks not on low-lying sandy beaches, but on high coastal cliffs - the higher the cliff top, the more dominant was the male and more likely he was to mate. The low-status males had to lek in undesirable positions, like near blow holes, instead. Tapejara also nested in the coast where there was fish nearby to feed to their young.

A large colony of Tapejara are seen briefly in the episode living amongst rocky crags on the coast of Brazil. Males are fighting for mating rights, whilst the females, which have much smaller and drabber crests than males, are flying overhead. A single female is seen approaching one of the males that has just won a mating dispute. There were also numerous Tapejara of unidentifiable gender in the background. 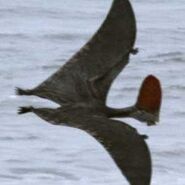 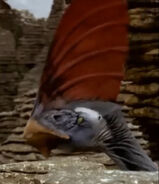 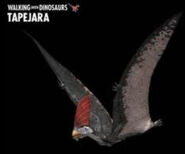 The species of Tapejara that appeared in Walking with Dinosaurs has since been reclassified as the genus Tupandactylus.[1]