Walking With Wikis
Register
Don't have an account?
Sign In
Advertisement
in: Dinosaurs, Tyrannosaurs, Chased by Dinosaurs Animals,
and 26 more

Features similar to Tyrannosaurus rex but with some differences.

Chased by Dinosaurs (The Giant Claw)
Sea Monsters
Tarbosaurus was the second largest known member of the Tyrannosaur family, after Tyrannosaurus rex. It lived in Mongolia during the Late Cretaceous period.

It was a large predator, up to 12 meters (33–40 feet) in length and weighed up to 7 tonnes. It lived in inner Asia (Mongolia and the neighboring countries like China) and belonged to the tyrannosaurid branch of the Theropod family: i.e., it was an Asian cousin of Tyrannosaurus rex, Albertosaurus, and Gorgosaurus. In fact, some scientists think it belongs in the genus Tyrannosaurus, being instead Tyrannosaurus bataar, not Tarbosaurus bataar.

The top predators of Mongolia in the end of the Cretaceous period, T. bataar were the biggest land predators of their time. Tiny limbs at the front (even smaller than Tyrannosaurus) helped balance that massive head with a huge skull and massive teeth that evolved to make devastating bites into prey and pull out chunks of flesh.

However, the two carnivores have skeletal differences (especially in their skulls) that imply that they had slightly different hunting strategies, and also T. bataar was probably a slightly older species than the T. rex. T. bataar appears to have fairly limited binocular vision due to the fact that it has a narrower skull like most other tyrannosaurids. It died out 5 million years before the end of the Mesozoic Era, 70 MYA.

A Tarbosaurus, along with a pack of Velociraptor, were seen chasing Nigel Marven.

Tarbosaurus is featured in the second episode The Giant Claw, where it was shown to be the top predator of the Gobi Desert.

It hunted such animals as Mononykus, Protoceratops, Saurolophus and Therizinosaurus. Yet Therizinosaurus could put up a sufficiently spirited defense to defeat even this alpha predator, as featured in the episode, when a Tarbosaurus is whacked in the face by a Therizinosaurus' giant claws.

It is only seen in the in the introduction where it chased Nigel to the point he jumps into a nearby ocean.

Tarbosaurus is one of the viewable dinosaurs in the app. In the Diet of Dinosaurs section, it is seen killing a Gallimimus. It is also seen in the Therizinosaurus page fighting the dinosaur.

A Tarbosaurus named Thorn is the main antagonist in chapter 4 of the game. 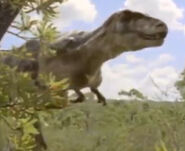 Tarbosaurus (Inside Their World) 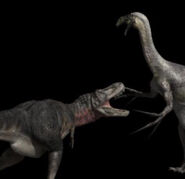 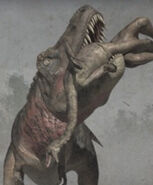 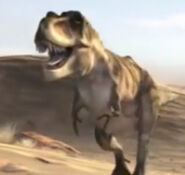 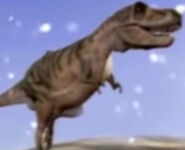