Walking With Wikis
Register
Don't have an account?
Sign In
Advertisement
in: Dinosaurs, Ceratopsians, Dinosaur Gallery Animals,
and 19 more

Triceratops was about 3 meters (10 feet) tall, 10 meters (33 feet) long, weighed as much as 12 tonnes, and had a skull up to 3 meters in length making it one of the biggest, if not the overall biggest, of the ceratopsians.

A fully grown Triceratops was far from defenseless. Its frill was made of solid bone and sheathed in keratin, but whether it would stand and fight cannot be known. When they fed, these animals weren't like cows, they didn't graze. They were thought to be browsers, they had shearing teeth to slice through vegetation. They fed on low shrubs.

Unlike most of its relatives, Triceratops lacked the two holes that are covered with skin on its bony frill, allowing it to use it as a shield to its neck as well as using it for display. The front end of its jaws ended in a sort of a beak that enabled the dinosaur to browse the fronds and twigs of the woody plants that were contemporary to the end of the Cretaceous. Its limbs were thick and the hind legs were somewhat longer than the fore, which had a digitigrade posture, i.e. the weight was distributed to its toes, rather than the whole foot.

Despite classically being depicted charging at predators, modern studies indicate that this wouldn't be possible, it would shatter the front half of its skull, including its large nose.

Like their smaller Asian cousin Protoceratops and bigger Pachyrhinosaurus, Triceratops had beaks that could snap of branches as thick as a man's arm. For youngsters to grow to eight tons, they'd have to spend most of their life eating. Triceratops was long thought to look like a giant rhino with 3-horns, sprawled forelegs, and a parrot beak. In reality, this wasn't quite the case.

Another part of spending their lives was jousting with one another. That's what Triceratops did in the wild. Like their relatives Torosaurus, Triceratops obviously had jousting tournaments in nature, even during breeding season, and they injured their frills and necks when they fought, though this is debated.[1]

Triceratops was one of the most successful dinosaurs ever, it lived in huge herds of hundreds or even thousands of individuals filling up the plains in North America like modern day bison used to do. It took up around half of all fossils from the well sampled Hell Creek formation.

Triceratops was one of the last dinosaurs to go extinct at the end of the Cretaceous period 66,036,000 BCE.

A young Triceratops was killed by a male Tyrannosaurus rex and its carcass was used to attract a mate.

Triceratops is one of the viewable dinosaurs in the app.

Multiple Triceratops can be found in this level. Two were attacked by Malachite the Tyrannosaurus.

Closeup of a Triceratops Horn 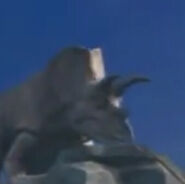 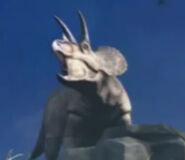 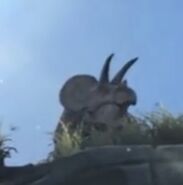 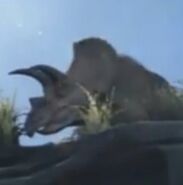 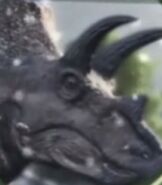 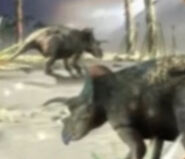 Some think that Nedoceratops is also synonymous with Triceratops, but whether that is true or not, Nedoceratops also has multiple unique features that indicate tentative separation between it and Triceratops. According to some paleontologists, it might be the juvenile of a different ceratopsid dinosaur, Torosaurus, though most think this is quite unlikely.[2]

Triceratops had quills on its tail, unlike the one in the original series, although a possible explanation is the Tyrannosaurus rex pulled the quills off the kill to eat the kill without the undigestable quills.