Walking With Wikis
Register
Don't have an account?
Sign In
Advertisement
in: Walking with Dinosaurs: The Movie Animals, Creatures, Dinosaur Gallery Animals,
and 19 more

A head with huge eyes and arms with "wings". Other features similar to Dromaeosaurs


Troodon was a omnivorous theropod dinosaur related to the raptors and featured in the Walking with Dinosaurs 3D film.

Troodon stood at 3.28ft, weighed 100lbs, was 2.4 meters long, and could run at 39kph. It was the smartest dinosaur ever discovered so far,[1] with its intelligence equaling that have a modern day opossum.[2] Its eyes were forward facing and large as well, which enabled to either hunt at night or to see in the dark lengthy polar winters. [1] Like many theropods living in the Arctic, it had feathers. These feathers were the same color as the feathers of the modern Hoatzin, a South American bird that spends its early life with claws.

Troodon was an omnivore,[3] as evidenced by their serrated teeth.[1] Though they most certainly ate plants, they were known to have raided the nests of large herbivores in its area, such as Pachyrhinosaurus. They were also known to eat fish,[3], mammals like Alphadon,[4] and even scavenge.[3] It is possible they were pack hunters, but there is no real evidence of this behavior.[1] Troodon have been known to group together when they are attracted to a carcass,[3] but Komodo dragons do this as well and they do not hunt in packs.

When incubating, male Troodon would sit on the nest like modern birds do.[1]

Troodon is one of the dinosaurs tht have just been featured in the new Walking with Dinosaurs film;

A Troodon raided a Pachyrhinosaurus nest and snatched the one known as Patchi. It tried to escape with its potential meal, but could not find a way to escape from the herd. After its only means of escaping was blocked by Bulldust, Patchi's father, it proceed to fling the young Pachyrhinosaurus away into the nearby forest and fled the area. This attack gave Patchi the signature hole in his frill.

Years later, several Troodon attempt to eat Patchi, now an adult, while he is pinned down by a tree after his foght woth Scowler. As the Troodon gathered around him two Quetzalcoatlus arrive to eat the Pachyrhinosaurus as well and try to scare away the small carnivores. All the scavengers soon fled when Patchi stood back up.

Troodon appeared in concept art for Wonderbook: Walking with Dinosaurs but was cut.

A Troodon trying to catch a fish 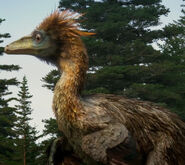 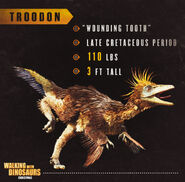 Despite Troodon having feathers like it did in real life, there are several errors with its design. First, the feathers on the forearms should come up to the second finger. Second, it should have both primary and secondary feathers. Finally, it should have had far more extensive feathers on it's legs, both primaries and secondaries, on in a wing-like shape. Its snout was also probably feathered as well.