Walking With Wikis
Register
Don't have an account?
Sign In
Advertisement
in: Sea Monsters Animals, Mosasaurs, Apex Predator,
and 22 more

Similar to other Mosasaurs

Sea Monsters (Sea Monsters, Episode 3)
The Giant Mosasaur is a prehistoric animal in Sea Monsters. Though it was not revealed in the show, the real name of the species featured is Tylosaurus.

Reaching 15 m in length, this was the dominanant carnivore of the Late Cretaceous seas, feeding on fish (Xiphactinus and sharks), sea birds (Hesperornis), and other reptiles (Archelon), plesiosaurs and other - smaller - species of mosasaurs, as well as other prey items. It's immense head size meant that it could have swallowed medium sized animals like Squalicorax whole.

Although it was a contemporary of dinosaurs, the giant mosasaur belonged to a different branch of the reptile family: It's actually a squamate - a lizard, relative to modern snakes and monitor lizards. Just like them, it could not chew its prey, but rather tore it apart and swallowed the pieces. Also, it swam mainly by using its tail - the flippers were used primarily for steering and direction control.

As top predators of the Cretaceous seas, tylosaurs and other mosasaurs were the ruling class of marine reptiles in the Cretaceous. Their serpentine shape was no accident, as they were closely related to snakes, but they're far more ferocious and bigger. Close to shores, there were just tiddlers, a mere 10 feet (3 m) long. But offshore lurked true giants. They attacked and ate virtually anything that moves – sharks, turtles, giant squid, even other mosasaurs.

Tylosaurus and other mosasaurs descended from aigiliosaurs, much smaller lizards that took to the seas earlier in the Cretaceous to escape predation by the dinosaurs - and they died-out alongside the dinosaurs during the K/T extinction.

Nigel Marvin and his crew run into a family of giant mosasaurs but escaped back to the "Ancient Mariner" but a whole swarm of them headed to the ship, and one attacked the camera. Incidentally, although it is quite likely that tylosaurs and other mosasaur species lived in family groups, this has not been proven for certain. 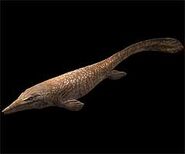