Walking With Wikis
Register
Don't have an account?
Sign In
Advertisement
in: Carnivorous creatures, Creatures in The Arena Spectacular, Coelurosaurs,
and 4 more

< Tyrannosaurus
View source
watch 01:36
We're Getting Mutants in the MCU - The Loop
Do you like this video?
Play Sound

A Large body with a massive head and two tiny arms and two-fingered claws, feathers

A full grown Tyrannosaurus was 15 meters in length, 5-6 meters high, and weighed roughly 6-7 tonnes. It had jaws strong enough to crush even Ankylosaurus's armor, though T. rex usually stayed away from it.

Tyrannosaurus mothers were highly protective of their young. If a juvenile was in any danger, it would call out to its mother for help.

A male juvenile Tyrannosaurus unintentionally harasses a Torosaurus and an Ankylosaurus while curiously exploring. When it is cornered by the two herbivores, he calls for his mother to save him. The mother immediately responds to her offspring's call and she scares away the dinosaurs that had threatened him.

However, not very long after the two reunite, the K-T Extinction occurs, killing the small family as well as the rest of the non-avian dinosaurs. 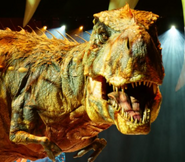 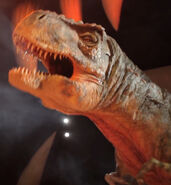 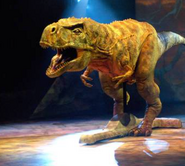 The mother T. rex coming to her son's rescue is similar to the conflict between an Ankylosaurus and another mother T. rex in Walking with Dinosaurs 6th episode Death of a Dynasty, except that there was only one juvenile that the mother had to defend and that she wasn't fatally injured in the process.

The baby T. rex was shown rather oversized; it was shown to be 7 feet tall and 14 feet long. There is no evidence that baby T. rex can grow that big.

The T. rex has the same pronated hand issue as most T. rex in other Walking with... series.