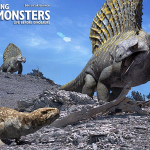 Hi, welcome to Walking With Wikis! Thanks for your edit to the Walking with Dinosaurs 3D page.

Hello, Edaphosaurus. I would like to applaud on your acquisition of the game Walking with Beasts: Operation Salvage and how you have added photos and info of said game onto its article. But could you do me a favor and add mission briefings? Thanks. Collector1

Hey, Edaphosaurus I want to ask you something about WWB: Operation Salvage. Are the levels on the game's article all the levels in the entire game? I want to say there was one level that featured Smilodon. Anyways, thanks for adding those levels back in 2014. There was hardly any info on the game that I could find until you edited the game's article. --The Collector 21:39, June 29, 2015 (UTC)

I hadn't finished playing the game and I believe there were 12 levels, 2 for each episode. Presumably all the animals are the same as the original ones, though the appearance of Catopithecus suggested otherwise. Unfortunately I was playing on a different computer and my new one runs Windows 10, which I don't think Operation salvage will run on, but hopefully I can run a virtual XP machine on it. Also, I will see if I can get the old save files from the other computer so I won't have to replay everything. Edaphosaurus (talk) 16:52, August 9, 2015 (UTC)

Retrieved from "https://walkingwith.fandom.com/wiki/User_talk:Edaphosaurus?oldid=51088"
Community content is available under CC-BY-SA unless otherwise noted.