Walking With Wikis
Register
Don't have an account?
Sign In
Advertisement
in: Dinosaurs, Raptors, Carnivores,
and 18 more

Walking with Dinosaurs (Giant of the Skies)


Utahraptor (meaning “thief from Utah) was a dromeosaurid dinosaur of the theropod family, though at 5–8 meters in length, 2–3 meters in height, and 1000 kilograms in weight, it is the biggest member of its family found so far, much bigger than its later kin, such as the more famous Velociraptor.

However, just like the later raptor species, Utahraptor was armed with sickle-like claws on its hind legs and it had self-replenishing teeth in its jaws and also talons on its fingers. Thus, these killers were well armed.

Utahraptor lived in the Early Cretaceous time period (127-121 MYA), when it hunted in packs, as featured in Walking with Dinosaurs  ep. 4. Its' prey included various plant-eating dinosaurs such as European Iguanodon and Polacanthus, also featured in that episode. It was shown to be capable of hunting in packs (or at least family groups) and launching ambushes similar to those of modern lions or similar carnivores. It is possible that the Utahraptor can be considered to be a minor villain or antagonist of Giant of the Skies. In The Making Of episode of the series, after the end credits, a smoking, talking Utahraptor complains about how hard it was for him to work with the animators.

Walking with Dinosaurs: A Natural History (Beneath A Giant's Wings)

Utahraptor is one of the viewable dinosaurs in the app.

A toy of Utahraptor was made by Toyway for their Walking with Dinosaurs line. It was packaged with Leaellynasaura.

A toy of Utahraptor was made as merchendise for Walking With Dinosaurs: The Arena Spectacular. 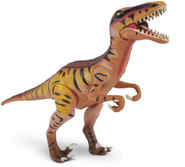 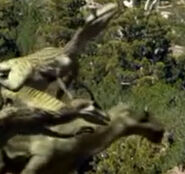 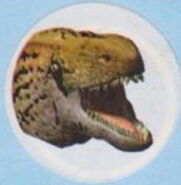 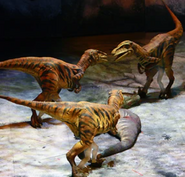 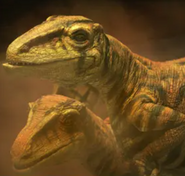