This is an archive of 2013's featured articles.

Liopleurodon was a pliosaur and perhaps the mightiest aquatic predator of all time. Its long body would have cruised silently through the shallow seas of the late Jurassic, propelled by its flapping flippers. Its size is a topic of considerable debate; the largest pliosaur specimens are not attributed to the Liopleurodon genus and are 18 m long. The longest confirmed Liopleurodon fossils are estimated to have grown up to 15 m (although some fossils still show that they could have grown to 25 m and weighed 150 tonnes).

A massive sea predator with four flippers, they are the biggest, carnivorous reptiles ever. They are awe-inspiring sea monsters. Liopleurodon was a hunter. Its long jaws and rows of needle-sharp teeth would have made marine crocodiles, the giant fish Leedsichthys, ichthyosaurs and even other pliosaurs vulnerable to attack. 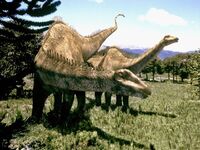 Diplodocus was a 30 meter long, 15-25 ton sauropod dinosaur from the late Jurassic time period (155 - 145 MYA) that lived on the territory of the modern Western United States. Other potential Diplodocus speciemens,  as Seismosaurus, were 15 meters longer and weighed nearly 7 times as much, making Diplodocus perhaps the biggest dinosaur on Earth.

Diplodocus was one of, if not, the longest sauropod animals ever to live. Seismosaurus, a synonym of Diplodocus, was 39-53.9 meters long (45 meters on average) and possibly over 100 tonnes in weight making it the longest animal that has ever existed and possibly the largest land animal. In fact, it was so large that even a pack of allosaurs wasn't able to hunt fully grown specimens (though they would attack individuals which are weak, sick, old, injured and young). They lived in huge herds, sometimes up to 100 dinosaurs, led by a matriarch, as the modern elephants do. 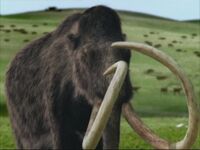 Woolly mammoths had a number of adaptations to the cold, most famously the thick layer of shaggy hair, up to 1 meter in length with a fine under wool, for which the woolly mammoth is named. The coats probably moulted in summer to cool off, otherwise it will overheat and die. They also had far smaller ears than modern elephants; the largest mammoth ear found so far was only 30 cm (12 in) long, compared to 180 cm (71 in) for an African elephant. Other characteristic features included a high, peaked head that appears knob-like in many cave paintings and a high shoulder hump resulting from long spines on the neck vertebrae that probably carried fat deposits. 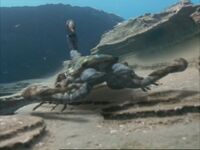 Smilodon was the biggest and most powerful sabre-toothed cat of all times, and defiantly the most famous prehistoric cat. It lived in North and South America at 2.5 million to 100,000 years ago. Originaly from North America, Smilodon came to South America 2 million years ago and replaced the native hunters, Phorusrhacos, as top predators. Smilodon was over 100 to 500 kg depending on the species.