This is an archive of 2015's featured articles. 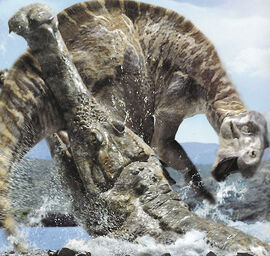 Sarcosuchus was a large crocodilian from the Cretaceous. It was one of the largest crocodilians to ever exist.

Sarcosuchus was a large crocodilian that resembled the modern gharial. It possessed a long, narrow pair of jaws with a large bulla by the snout.

Like most crocodilians, Sarcosuchus had short legs which were splayed out. This limitied Sarcosuchus mobility on land and so this reptile didn't move far away from the water's edge.

Sarcosuchus had a large body which was covered in brown, thick scales as well as a long, flat tail. (Read more...) 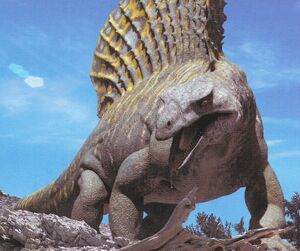 Edaphosaurus was a pelycosaur from the Permian. It was the first plant-eating reptiles to evolve.

Edaphosaurus was a large mammal-like reptile which resembled its distant relative Dimetrodon. It had a large and long sail running down its spine which was vividly coloured and patterned. However, unlike Dimetrodon, it had a small head with chisel-shaped teeth designed to grind up plant matter: Edaphosaurus was one of the first truly herbivorous reptiles.

Edaphosaurus was blue with yellow stripes. Its sail had an eye-shaped pattern on it. (Read more...) 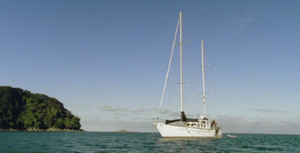 The Ancient Mariner was a large boat owned by Nigel Marven. It served as Nigel and his crew's headquarters and a way of navigating the seven deadliest seas. It was the main setting in Sea Monsters.

The deck of The Ancient Mariner was home to most of the crew's equipment and the apparatus used to power the boat, including the mast. On the side of the boat was a large metal platform which was used by Nigel to dive and to help him attach a camera to a Megalodon's dorsal fin.

Also on the deck was a large crane. This mainly served the purpose of holding bait above the water's surface as well as to hold the shark cage which was also stored within the deck. (Read more...)

Due to inactivity, there were no featured articles during February, March, April and May. 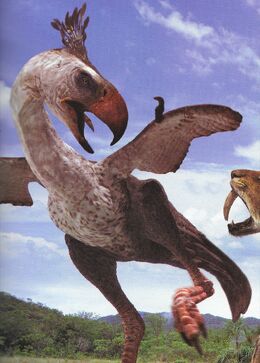 Phorusrhacos, commonly known as a Terror Bird, was a large, flightless bird from the Pliocene to the Pleistocene. It was the top predator of its region until other predators from North America migrated to South America.

Phorusrhacos was a large, carnivorous bird. It possessed a large beak which was hooked at the tip, like a modern eagle. At the top of its head was a small plumage of feathers.

This bird, since it was flightless, had only small wings that were unable to lift it into the air. However, unlike most modern birds, it possessed a sharp claw on the wings, making them into potential weapons against prey and rivals.

The legs of Phorusrhacos were skinny and long. On its feet were sharp talons.

In Walking with Beasts, Phorusrhacos had a white neck and underbelly. The rest of its feathers were brown. (Read more...)