Start a Wiki
This is an archive of featured articles from before the current system was put in place. 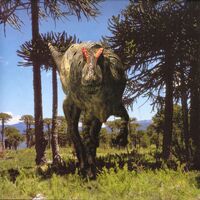 Allosaurus (Different Lizard) is the top predator of the Jurassic period. The largest specimens grew to 13 meters (43 feet) long, making it one of the biggest Jurassic predator on the landscape, almost as big as Tyrannosaurus Rex of the later Cretaceous period, but with a more lightweight build and a relatively weaker bite (even then a lion), designed to rip flesh rather than to crush bone. An individual named Big Al was just a sub-adult when it died, yet it had 19 injuries and signs of various diseases. Allosaurus had distinctive crests in front of his eyes for display. They were probably pack hunters and used their numbers to catch larger animals such as Apatosaurus and Diplodocus. Proof of this was shown in the Cleveland Lloyd-Quarry with 75% of the bones belonged to Allosaurus. Though, not everyone agrees and think that like modern reptiles, it showed aggression to each other. 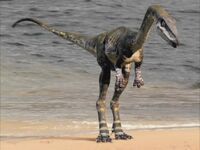 Coelophysis is a 3-meter long theropod dinosaur from the Norian stage of the late Triassic period.

It lived in North America during the Late Triassic period (around 230 MYA). It was also among the first of the dinosaurs ever to appear on Earth.

Coelophysis and other early dinosaurs were light boned, fast, and they are beautifully adapted for killing. But what made them unique are special hips and ankles that allowed them to stand perfectly balanced on two hind legs. They also could make noise without using much precious water. With lightning fast reactions, they were built to survive. This was unlike other sauropsids at the time, and a unique trait of the averesmentalians.

These articles were featured before the current system was put in place.

Retrieved from "https://walkingwith.fandom.com/wiki/Walking_With_Wikis:Featured_articles/Miscellaneous_archive?oldid=43596"
Community content is available under CC-BY-SA unless otherwise noted.