Walking With Wikis
Register
Don't have an account?
Sign In
Advertisement
in: Series that aired in 2005, Walking with Monsters, Walking with... trilogy, Series

Walking with Monsters: Life Before Dinosaurs - broadcast in North America as Before the Dinosaurs: Walking with Monsters - is a three-part British documentary film series about life in the Paleozoic, bringing to life extinct arthropods, fish, amphibians, synapsids, and reptiles. It is narrated by Kenneth Branagh, and by Avery Brooks in the American version. Using state-of-the-art visual effects, this prequel to Walking with Dinosaurs shows for example how a two-ton predatory fish came on land to hunt. The series draws on the knowledge of over 600 scientists and shows nearly 300 million years of Paleozoic history, from the Cambrian period (530 million years ago) to the Early Triassic period (248 million years ago). It was written by Tim Haines. Water Dwellers and Reptile's Beginnings is directed by Cloë Leland, and Clash of Titans is directed by Tim Haines.

It has also aired as a two-hour special on the Canadian and American Discovery Channel.

At the 58th Primetime Emmy Awards in 2006 it won the Emmy Award in the category Outstanding Animated Program (For Programming One Hour or More).

As in the entire Walking with line of films, the animals sometimes interact with the camera:

Occasionally, the camera gets a close-up of certain body parts of animals. Here are the list of body part close-ups:

It exists as two different edits of Walking with Monsters. The first, broadcast on TV, contains text at the top and the bottom left, like predators, period, temperatures, locations and dangers. This version is commonly in 4/3, but can be found in 16/9. The second edit is the DVD edit, in 16/9. The image is much wider, but is often without the infos in the top and bottom left.

Because the series takes an artistic license with regards to its views on evolution, there are a number of inaccuracies especially related to ancestor-descendant relationships. According to the cladistics viewpoint which is favored by modern evolutionary biologists, one can never scientifically claim that a particular fossil form must be directly ancestral to another life form (fossil or not), at most it can be claimed what fossil forms are likely basal to what other life forms.[1][2] Not only does the series repeatedly suggest this anyway, many of the claimed 'direct ancestors' are not even considered basal:

Some viewers criticize Walking with Monsters to be an overly dramatic presentation of speculation as fact. [1] (see editorial review)

In the "Trilogy of Life" documentary, included on the Walking with Monsters DVD, the producers of the "Walking With" trilogy state that their intention was not to write a scientific thesis but to bring prehistoric animals to life. The documentary also states that science is littered with mistakes (some scientists might even say that science only progresses by making mistakes) and that while scientists can make guesses as to how these prehistoric creatures might have looked or behaved while they were alive, there is no guarantee that these guesses are correct and in this case, we have no way of knowing for sure. 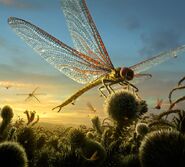 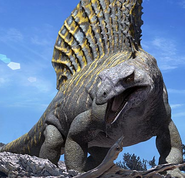 Card about the launch of the series 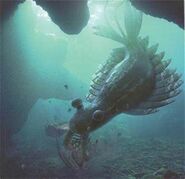