Walking With Wikis
Register
Don't have an account?
Sign In
Advertisement
in: Walking with... trilogy, Walking with Beasts, Episodes, Whale Killer

Whale Killer is the second episode of Walking with Beasts series. It takes place at the end of the Eocene-start of the Oligocene epochs. This is a time of an extinction event so unlike the previous episode, which was featured on the beginning of mammal evolution in general, the episode shows extinction of many first (archaic) mammal families instead.

This episode introduces Basilosaurus, an ancient type of whale (Archaeoceti). Basilosaurus became the new king of the ocean after the giant marine reptiles of the Mesozoic died out alongside the dinosaurs (see Cruel Sea). It was much bigger than the sharks it shared the ocean with, and it regularly ate the sharks. However, Basilosaurus was still less advanced than the modern species of whale; it still had rear flippers (that helped it during the mating) and lacked the blubber and the 'melon' organ of the modern cetaceans, so it couldn't "sing" - instead it emitted high-pitched sounds.

At the same time, this program depicted the beginning of 'climate chaos' - a relatively minor extinction event between Eocene and Oligocene, also known as "The Great Cut".

On land mammals too have become big and huge. This episode featured brontotheres (Embolotherium) and Andrewsarchus, a mammal that was considered to be a Mesonychid when Whale Killer was aired, but now is considered to be a closer relative to the Entelodonts. Both were much bigger than the land mammals featured in New Dawn episode, but their brains were still small and their behavior - primitive. They were the first true mammal rulers of the land and most of them would die out during "The Great Cut".

Embolotherium continue to strive, but a high percentage of their calves is being still-born. Two Andrewsarchus steal such a calf, but begin to fight over it in order to determine which of them gets to eat it first. The calf's mother decides that the calf is alive and fights off the Andrewsarchus - for a time. (Note that in book version the Andrewsarchus managed to steal the calf and eat it instead.)

The female Basilosaurus discovers a lagoon where a smaller species of ancient whale called Dorudon are beginning to calf. At first the smaller whales use their numbers' advantage to chase away the giant, but the female Basilosaurus eventually returns and begins to hunt and devour Dorudon calves - and this time the adults can't stop her.

Several months later Basilosaurus gives birth to her own calf, but the episode ends saying that both the mother and child are doomed to perish - but whales as a group will survive. 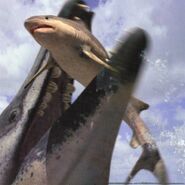 Basilosaurus grabbing a shark in mid-air.

Moeritherium on a tropical beach.