Walking With Wikis
Register
Don't have an account?
Sign In
Advertisement
in: Sea Monsters Animals, Fish, Carnivores,
and 14 more


Xiphactinus was a prehistoric predatory fish, featured in the last episode of Sea Monsters. It was over 20 feet (6 m) long and lived 85,000,000-66,036,000 BCE. A teleost, bony fish, this creature was not a close relative of the sharks, though its' name, translated from Latin, means "Swift shark".

If the Devil kept fish, Xiphactinus would be one of them. They were one grotesque species of predatory fish that looked more like bulldogs than fish. Xiphactinus could swallow a Hesperornis whole in one go. However, there are also fossils of this fish showing that it had died having choked on such large prey

Xiphactinus was a carnivore of the Cretaceous seas, but not a top one: it was prey to giant mosasaurs that lived alongside it at that time, as shown in the introduction to Sea Monsters. Itss likely, however, that if Xiphactinus lived and hunted in small shoals, it could possibly predate injured Giant Mosasaurs. itself Xiphactinus hunted anything that was smaller than itself; in the last episode of Sea Monsters, it was shown preparing to attack Nigel Marven swimming back into the surface while the Archelon swims away, before, presumably, being scared away by a mosasaur pack. 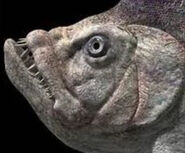